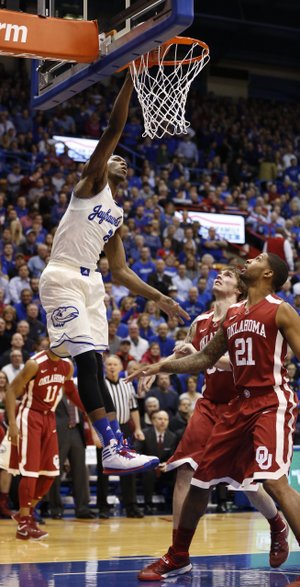 After watching the first 5 minutes I thought it was gonna be a blow-out again, but maaaan, OU fought hard. But Nadeer & his team were just too strong in the end. Both teams gave all they got in final minutes. Big congrats to KUCMB & coaching staff for back-to-back-to.. 10x!! Rock Chalk!

Tharpe has been and is the man. I'm very glad he's running the show.

The same could be said for Coach Self. It's so easy to take for granted what he's accomplished, but I'm still amazed at how consistently good a coach he is.

Self is the best and most complete coach ever in my opinion. There's not one phase of being a coach / leader / teacher / public relations / cool guy etc that he doesn't excel in. His philosophy, focus, instruction -- everything he does, he does with aplomb. There's no other modern coach who is as all around great as he is. I'll make that case any day.

Has anyone come close to Bill's record of winning 10 of his first eleven conference titles!!??

Even the great John Wooden was, at the time, an amazing 6 out of 11 conference titles and actually six out of 13 before he started his fabulous run of 13 out of 14!!

Bill has a chance to DOUBLE John Wooden's first 13 year title total after his first 13 years at Kansas!!! We are UNBELIEVABLY lucky to have this man as our coach.

[Tyler, we all hope you fully recover but thanks for giving us your Dad for at least another three seasons!!! ]