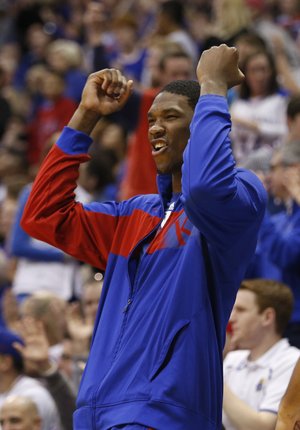 Injured Kansas center Joel Embiid celebrates a dunk by forward Tarik Black during the second half on Saturday, Feb. 15, 2014 at Allen Fieldhouse.

Embiid, who was slowed by knee and back injuries while playing just 18 minutes in Monday’s loss at Kansas State, was held out of Saturday’s win over TCU. He’s slated to play in Tuesday’s 7 p.m. game against Texas Tech in Lubbock, Texas.

Embiid, who according to Self could have played against TCU, has had no structural damage in his knee or back. His physical problems have been more of the severe-bumps-and-bruises variety.

“The thing about it is, this time of year more than anything, it’s not so much if you get yourself energized as much as how does your body feel,” Self said. “There’s a lot of bodies across America right now. There’s a lot of guys that have got a lot of nicks and a lot of guys that are playing with turned ankles or this or that, and they’re sore, but they’re not hurt and things like that, and I do think that’s natural this time of year.”

Withey in the house: Former KU center Jeff Withey of the New Orleans Pelicans has averaged 2.3 points and 2.1 rebounds while playing 8.9 minutes a game in 29 games at the All-Star break of his rookie season. He has 14 blocks.

“It’s great. It’s a learning process from college. It’s a lot different. It’s a longer season,” said Withey, who attended Saturday’s KU-TCU game. “I’m really happy where I’m at being in New Orleans. I like all my teammates. I will continue trying to get better.

“I’m excited to see a (KU) game,” he added of KU’s 95-65 victory over the Horned Frogs. “I’ve not been able to see any of the games, even on TV because we’re so busy with our season. I went to practice (Friday) and saw coach Self and all the other coaches and said ‘What’s up’ to all the guys. It’s great to be back in Lawrence.”

Movie talk: Looking back on Friday’s premiere of the movie “Jayhawkers,” Self said he especially enjoyed scenes involving KU’s 54-53 triple-overtime loss to North Carolina in the 1957 NCAA title game.

Camp in May: Registration is open for the third-annual Bill Self Basketball Fantasy ProCamp, May 2-4 in Allen Fieldhouse. For information on being a player or coach at the camp, go to www.billselfexperience.com or e-mail mchacksfield@procamps.com.

I will say this ... a hyper-extended knee, that was mere millimeters from a torn ACL, that caused a bone bruise (because of the femur and tibia collide), that caused a "sprain" (surely of the pcl), is not of the "bumps and bruises variety."

Sorry coach. I can absolutely guarantee you that Dr. Randle would not say that.

Embiid had a moderate knee injury that caused a weakening of the structures of the knee that is inherent in a "sprain." The weakening created a situation where he was more susceptible to further injury, even if wearing a brace.

Coach Roberts was on a radio program last week after the KSU loss and said resting Embiid after the KSU game was "the plan all along."

So, we obviously played Embiid when he was far less than 100% because we were playing a more difficult part of the schedule.

Also, regarding the back injury -- don't discount the fact that the knee contributed to the back. Altering of one's gait or stride can put undue strain on the back. Many folks with leg injuries develop back issues. Although the back "tweak" seemed to occur because of the way he landed, it is clearly possible that Embiid protecting the knee put strain on the back, and led to the "tweak."

My concern when the knee injury happened was that it was a 2-4 week recovery, and that we rushed him back way too soon. My concern now is that this knee injury will affect him and make him less effective for the rest of the season.

He clearly hasn't been the same since the knee injury at TCU.

I agree. We need to rest him more. Not worth ruining this guy's future because of 2-3 weeks of not resting his injury.

Jack Wilson, have you personally examined Joel and seen his films?