KU women fall short in upset bid at No. 12 OSU 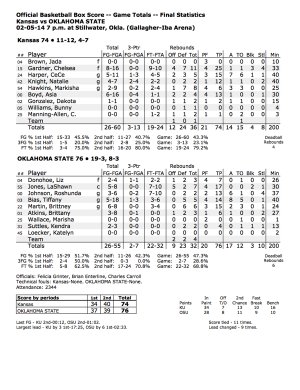 Stillwater, Okla. — Kansas University senior guard CeCe Harper missed a last-seconds layup to tie the game against Oklahoma State on Wednesday night at Gallagher-Iba Arena, giving the No. 12 Cowgirls a 76-74 victory over the Jayhawks.

Ten seconds earlier, Harper pulled KU within a point on an and-one layup and foul shot against OSU’s Tiffany Bias. Kansas immediately fouled to force free-throws by Brittney Martin, who missed the first and made the second. Harper raced up the court and put up a shot with two seconds left, and time expired as the teams tried to corral the rebound.

Kansas will face Oklahoma at 2 p.m. Sunday in Allen Fieldhouse.

Next years coach will have some talent to work with. Any chance it can be the opposing coach from last night? Why the hell he wasn't hired from Seward by that ex incompetent AD I will never know.