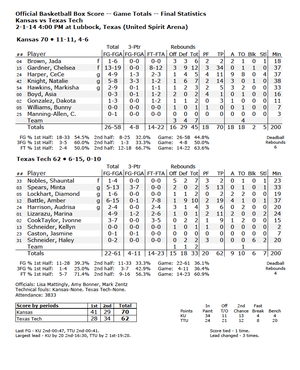 Kansas made 18 of its 33 shots (54.5 percent) in the first half to lead Texas Tech at halftime, 41-28. KU closed the period with a 9-1 run, which included two three-pointers by junior guard Natalie Knight. Gardner had a season-high 23 first-half points for Kansas, going 11-of-13 from the field.

The Jayhawks will face Oklahoma State on Wednesday night in Stillwater, Okla.