With clinic, practices, Jayhawks ‘living at the gym’ 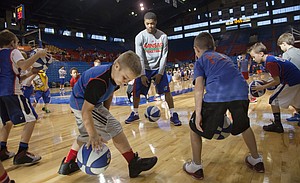 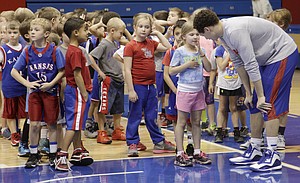 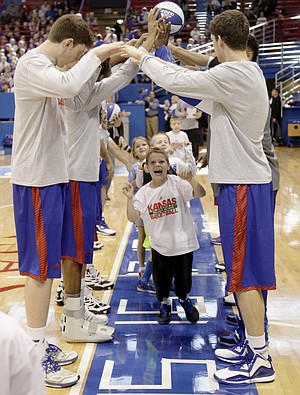 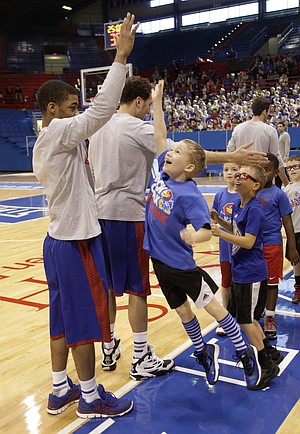 Kansas University’s basketball players, who had already completed four practices in three days — including one that started at 8:30 a.m. Sunday — returned to the Allen Fieldhouse floor to work with 500 youths for three hours Sunday afternoon.

“Not really,” KU junior forward Jamari Traylor said, asked if he was worn out entering the Jayhawks’ annual holiday clinic for boys and girls in first through sixth grades. “I’m the ‘energy guy,’ so it shouldn’t be that hard for me to come out here and have a good time with little kids. We’re in holiday time. I know these kids are out here to have a good time, and I want to do the same thing.”

It’s interesting the 6-foot-8 Traylor referred to himself as the energy guy just a few minutes after coach Bill Self told reporters, “We only have to me one guy playing with great energy right now.”

That person, one of the few to compete to Self’s satisfaction during Monday’s 77-52 road loss to Temple, is Traylor.

“Frank (Mason) has been our best player, without question. Frank played well against Temple offensively, but Jamari, from an effort standpoint ... he brings it every day,” Self said.

Self, who awarded his players three days off for the holidays following the Temple loss, gathered the troops for a Friday night practice. All 15 players were in attendance, with nobody having travel delays.

“The first practice was fine. The guys came back, (and) all had good attitudes,” Self said. “It’s not the most fun time of the year for players to be away from their families and their friends when everybody is back home for the holidays where they are from. They are here living in the gym, but we need to be doing that.”

Self said the Jayhawks “watched the tape (of Temple loss) as a group the first night we got back so that way we could put it behind us and not talk about it again. There are a lot of reasons we didn’t play well. Obviously, we didn’t get them ready to play. I think the break may have had a little bit to do with it. The biggest thing is, we played with no enthusiasm, no energy and no passion, and we looked really slow. Unfortunately for us, it was a pitiful night for us.”

Self was asked if the reason for the loss that dropped the team to 9-2 was the players perhaps looking ahead to their three-day vacations.

“I think, yes, they were ready to go home and see their families. I’m not going to make excuses for our guys at all. We don’t talk like this, (but) it was not very smart to play Lafayette Saturday, travel and not practice really, and play them on Monday. We added to the lack of energy by also being a tired team,” Self said.

“The first half was bad (with KU down 35-25), but not awful. The second half was just horrific (42-27 Temple),” Self added of the KU defense. “They made hard shots, too. They made a bunch of guarded shots. We’re just not very good defensively or offensively right now statistically. We have to have everybody playing with great energy. You can make mental mistakes defensively. You can not do a lot of things right if you make up for it by being active, aggressive. We are not sound enough yet to not be active and aggressive. We were very exposed at Temple.”

KU will meet Kent State at 7 p.m. Tuesday in Allen.

“I just hope we get better at everything we are trying to do,” Self said. “We need to play faster. We need to create scoring opportunities off our defense and in transition or off second shots.

“We need to tighten up our defense. ... I’d love to play faster. We’ve done a couple things to hopefully help us play faster,” he added. “We don’t get any easy baskets right now. We don’t get it off creating turnovers. We’re not getting it off of rebounding, and we’re not getting it in transition. Our shooting percentage (41.7) isn’t worse than what it has been in other years other than we need to shoot some layups. If you get three layups a game, instead of shooting 20-of-50, you are 23-of-50, and that all of a sudden is 46 percent instead of 40. We’re not getting those layups.”

Tarik to Lakers: Former KU forward Tarik Black, who was released by Houston on Friday, has been claimed off waivers by the Los Angeles Lakers, ESPN.com reports. To make room for Black, the Lakers released injured former KU guard Xavier Henry, who suffered a season-ending Achilles tendon injury in November. Charlotte also made a bid to acquire Black, Yahoo!Sports reported.

“To the fans of the Lakers I am honored and can’t wait to get to work. Hopefully I can help this team and you guys will enjoy the process,” Black wrote on Twitter.

Hours before Black was picked up by L.A., Self told reporters he had spoken to “a couple teams since he got cut (who wanted to sign Black).”

“That (release by Houston) just goes to show you the business. You start 12 of 25 games and because of guaranteed contracts, he’s odd man out when they make an addition to the team (Josh Smith),” Self stated. “I think he played well enough and showed well enough that somebody will definitely give him an opportunity to pick him up.”

This, that: KU freshman guard Sviatoslav Mykhailiuk of Ukraine spent the Christmas holiday with friends of his parents in Washington, D.C. ... Freshman guard Devonté Graham, who sprained his right big toe on Dec. 10, continues to wear a boot on his foot. “We’ll get him checked here pretty soon, re-evaluated and go from there,” Self said, asked for an injury update. … Game time for KU’s upcoming game against UNLV will be 3:30 p.m. Sunday in Allen. CBS announced on Saturday that its NFL playoff game will begin at noon, thus the KU game is set for 3:30.

I appreciate that Self mentions that Traylor brings consistent energy. But he just isn't a high quality player. He is exactly what his non-ranking said he'd be. He's a redshirt junior, and is a serviceable 4th big. He should not be a third big at Kansas. I don't think we've seen any improvement since last season. He is consistently inconsistent. He can be terrific as he was in the EKU game, and he can be very bad as he has been for numerous stretches this season. Nothing negative, really, he just is what he is. And he is what we could have reasonably expected he would be.

Traylor averages just .214 rebounds per minute, and just .25 points per minute, good for 5th and 9th on the team respectively. That just doesn't cut it. He's worse than Lucas in both categories.

Traylor's played more minutes per game than Cliff, but Cliff has .321 rebounds per minute, and .439 points per minute. That's first and third on the team.

The better player needs to play substantially more than the lesser player.

Agree completely. Kansas is sputtering for lack of impact players. This year there is no Wiggins, no McLemore, no Simien or Pierce. We need to start winning more recruiting battles for starters, and then I think Danny Manning being gone hurts the development of our bigs somewhat.

100% spot on Jack. I hope Traylor is at least going to get a degree. As far as basketball he is a sub for this team, he just does not have the skill set to get better, add to that his inability to score with consistency and he is just a 10-15 minute a game guy, nothing more.

I agree with Joe we do not have, as of yet, the quality of players we have had in the past. Considering where we are in recruiting for 2015 this looks more like a trend than a unique one year blip. Something is amiss with attracting top talent to KU.

Agree losing Danny has been a blow.

The KU game on NFL Wild Card Sunday is ALWAYS at 3:30. Why don't they just set that time from the get-go?

Right, b/c of NFL broadcast rules about start times for teams in the West. That makes sense.

BTW, does anyone know how KU became a fixture on NFL Wild Card Sunday? We've made a CBS appearance on that day nearly every year starting in 2005, and our Wild Card Sunday record is 4-3.

Jack, I agree with your thoughts on Traylor. Not only did he not improve over the summer, his production per minute is actually down from last year (last year he averaged .25 rebounds and .30 points per minute) and we're not even in conference play yet. To me, he appears to be lacking some of the intangibles he brought to the team last year as well. I'm glad Self says he is playing and practicing with great effort, but it seemed like last year, especially during conference play, he seemed bring a toughness and energy almost every time he checked in a game. It did seem magnified when he played alongside Black, and Traylor may have gotten an emotional lift playing with Black that he's missing this year. In any event, this season is only a third of the way through, and I hope that Jamari can bring more of those intangibles as the season progresses, which will in turn have a positive impact on those production numbers. Bringing toughness and energy is something that can be expected of a player, no matter their ranking coming into college, especially when we've seen it before.

Had Traylor continued his improvement from where he was at at the end of last season, he would be a legitimate 1st big off the bench and spot starter option. That's not the case as he appears to have regressed skillwise to where he was as a freshman without being an energy guy. He just doesn't appear to be mentally into games like he was the previous two seasons and I don't know why and right now, he is a net negative. If he can pull his head out of his rear and get back to where he was in February and March of last season, he will be a net positive once again.