Kansas guard Kelly Oubre, Jr. is surrounded by Temple defenders during the Jayhawk's game against the Owls Monday at the Wells Fargo Center in Philadelphia, PA. 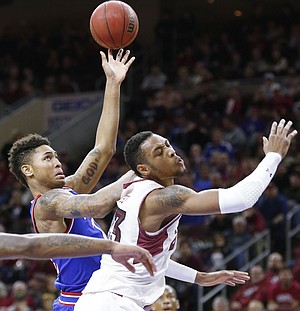 Photographs from the Kansas Jayhawks game Monday against the Temple Owls at the Wells Fargo Center, Philadelphia, PA.

Philadelphia — In what classifies as the good news of the day department, considering Kansas University’s 77-52 loss at Temple, Kelly Oubre Jr. on Monday was named Big 12 Newcomer of the Week for the period from Dec. 15-21. West Virginia’s Juwan Staten was named player of the week.

“I wish I was in Philly tonight to watch my KU boys play,” Embiid wrote Monday on Twitter.

He means what he says. Embiid attended one of KU’s volleyball matches at a tournament at Villanova this past season.

Stats, facts: Monday marked the two-year anniversary of Temple’s last victory over a top-10 opponent. The Owls defeated No. 3 Syracuse, 83-79, inside Madison Square Garden on Dec. 22, 2012. ... KU fell behind 7-0 before Frank Mason III made a layup with 16:31 left in the first half. That was nearly two minutes longer than KU's longest dry spell to start a game this season (18:17 vs. Kentucky). ... KU went 0-for-3 from the free-throw line in the first half, the first time the Jayhawks did not connect from the line in a half since the first half against Michigan (3/29/13). ... Mason extended his double-digit scoring streak to eight games. He led all players with 13 points at halftime and finished with a career-high 20 points. He had a career-high three steals ... KU started the second half 4-of-18 shooting with all four of those makes from Oubre.

More news and notes from Kansas at Temple 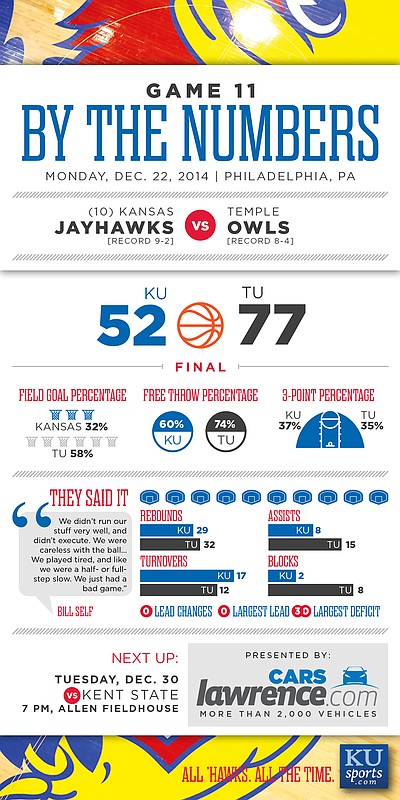 My Christmas wish for the Lawrence Journal-World: a new basketball writer.