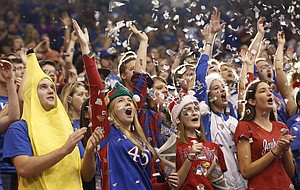 One of Kansas University’s best big men in practice the last 10 days has been a guy who, until Saturday, had played the least amount of minutes in games.

He’s Arkansas transfer Hunter Mickelson, who after logging one minute in the last five contests and 14 minutes in five games all season, erupted for eight points, seven rebounds and two blocks in 17 minutes in Saturday’s 96-69 rout of Lafayette in Allen Fieldhouse.

Norm is big-man coach Norm Roberts, who monitors the progress of KU’s bigs in drills every single day.

“Certainly he’s going to play more or at least get an opportunity to play more. We’re not going to play five big guys consistently, but we’ll play four. He’s earned the right to be one of the four, at least short term. It may switch who the four are each and every game,” Self said.

Mickelson, who hit 4-of-7 shots Saturday — he clanged a one-handed dunk try that would have given him his first-double-digit outing at KU — scored a season-high six points in a season-best five minutes against Rider on Nov. 24. His career highs in points and rebounds at Arkansas were 16 and 13.

“Sometimes you get in a routine and you kind of stick with it unless somebody just hits you over the head. He’s kind of hit us over the head the last week. He’s been really good in practice. His attitude’s been great,” Self said of Mickelson. “He just needed an opportunity. He got out there and did well today. We were actually better with him in the game.”

Of his string of strong practices, Mickelson said: “I just kind of had one of those weeks. I could feel everything going right.”

He was tipped off he’d receive extensive minutes vs. Lafayette.

“Coach kind of said a little something to me before the game with everybody in the locker room: ‘Just be ready,’ and when my time comes, make the most of it,” Mickelson said.

He said lack of playing time in the first nine games hadn’t gotten him down.

“I kind of have been in my head a little bit, just thinking ... nothing bad,” Mickelson said. “Kind of like Kelly said earlier, I’ve (also) been biding my time, whenever I get the chance make the most of it.”

Freshman Kelly Oubre, Jr., who made his second start of the season Saturday — he was ticketed to come off the bench until Brannen Greene reported a half hour late for weights Friday — erupted for a career-high 23 points off 9-of-15 shooting (4-7 threes) and 10 rebounds in 25 minutes.

“Brannen missed weights. He basically handed Kelly a starting job. That’s a good lesson for everybody,” said Self, who noted Oubre also has been great in practice of late.

“He seems to me he’s playing with more burst as opposed to just playing at one speed at a time,” Self said. “He’s kept a great attitude. He’s played very well.”

Oubre’s season-high in minutes came after playing 17 against Utah (nine points) and 16 versus Georgetown (seven points).

“I look at it as it’s part of the process. A lot of people say, ‘enjoy the process,’ that’s what I’ve been doing,” Oubre said. “It was a confidence booster, something to get me started, like a platform was built today. I’m going to keep doing the same thing I’ve been doing, being patient and enjoying the process,” he added.

“My conditioning was fine. We run up and down every day and go hard in practice,” Mickelson said. “I don’t think it was that much different. The lights get a little brighter when you are out there. I just had a good time. Like Kelly said, we’re playing for each other. I was glad to be part of it. I’m just trying to give all I can for the team.”

KU will next meet Temple at 6 p.m., Central time, Monday, at Wells Fargo Center in Philadelphia. 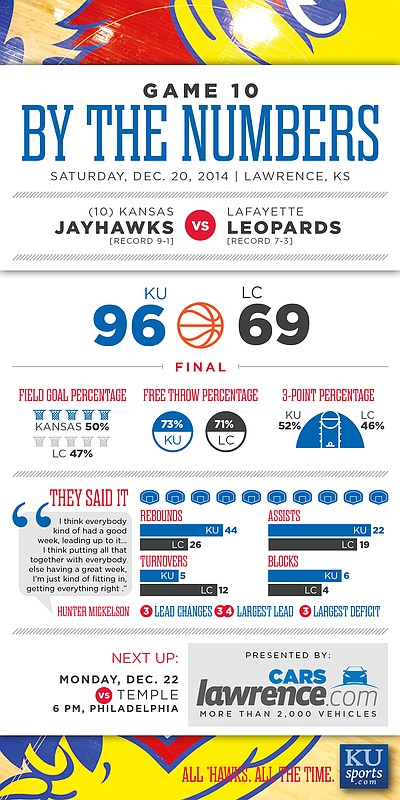 Just seeing Mickelson being aggressive trying to dunk the ball and going strong to the rim. I 2 would like to see him start.

Starting may be a bit much but I'd like to see him get Landon's minutes or at least give each of them an equal shot and play the hot hand each night (just like we're doing with Svi/Green/Oubre right now, sit whoever is having an off night). Hunter did look good in this game. Hopefully it wasn't just because the opponent didn't have any inside presence.

It was Lafayette, let's not get overly excited. Nice game though for the kid.

It's hard to believe this season's nearly a third of the way through! Our 9-1 record matches the best of the past 4 years (we were 9-1 in 12/13, though the schedule was not nearly as difficult as this year.) I am excited to see how this team will continue to improve through the next month, and I feel good about our chances going into conference play. Of course, I'll feel better if we can get to 9-1 in conference!

Great job by Self today managing minutes with no player going over 30 minutes. It's obvious he's trying to figure out the best lineup without Mason in the game. I thought Wayne did alright today at the point; he had some nice assists. Although he's probably the most disappointing player to me so far this season, I think there are still some games he will take over and go for 20+ points. In saying that, I'm not saying that's he's necessarily had a bad season, my expectations were just so much higher (maybe unreasonably high).

Mason is by far our most consistent player this season. I believe he is starting to play at an elite level. Could it be that Graham's injury may be a good thing for Mason? Does not having a backup raise his game a little more? Does he practice and play with a little more intensity knowing this is his team? Mason was playing great of course before Graham went down, but I wonder if that dynamic may end up being a positive thing for him.

I don't remember a year where narrowing down a rotation has been more difficult for Self and Co. Guys like Greene and Mickelson are refusing to fade away. I think playing a ten man rotation would be great. That kind of depth can be a huge advantage, and for the most part, guys seem to mesh well with just about anyone. I don't know that there are five players that we can say, those are definitely our best five on the court at any given time. It just changes every game. By the way, what a great breakout game for KO today! This new-hero-every-night theme reminds me so much of our 07/08 team. We had so many weapons on that team, and it seemed like every night someone new was having a monster game. Rush, Chalmers, Arthur, Kaun, Jackson, Robinson and Collins each had at least one game where they were the top scorer...in conference play. So far this year, we've already had five different players be high scorers (Ellis, Mason, Oubre, Selden and Greene, with everyone but Mason and KO doing it at least twice), but I could definitely see Svi and Cliff soon cracking that list as well. That's a lot of talent for one roster!

All is good when we're winning! Rock Chalk!

Landon Lucas has had every opportunity to prove his worth but his skills just don't translate to this level of basketball. Welcome to the show Hunter Mickelson!

I like where Oubre is heading. I think he will be a better player than what Wiggins was for us last season.

He's smooth and developing a great feel for scoring.

This team is really coming together.

So many negative posts this season and I don't quite understand where these people are coming from.

Gary, Can you advise as to who is the guy next to Self in the picture. Is he a new coach?

"I’m going to keep doing the same thing I’ve been doing, being patient and enjoying the process." What a great attitude from this young man! I'm rooting for you, Kelly!

Anyone else love the expression Coach Roberts has in this picture; he obviously is happy for his student's success in this game. Coach Self has assembled an amazing staff. The other break out player in this game, Oubre, I believe is the essential piece for this team. He has the capacity to threaten from the outside by touching the paint and posting up smaller, less physical defenders. I believe he is the offensive diamond in the rough and I hope to see him take giant steps over the winter break. My only current concern for this team is the loss of Graham. Even if not lost for the season, he will miss the practice time between semesters when steel is forged for the Big 12 battle and beyond.

Remember when everybody wanted to put down Jamari Traylor a couple weeks ago and now everybody wants to do it to Lucas....These are kids still trying to find their way. We will need all these kids at different times throughout the season.

The ups and downs are common for college basketball players, especially for "5-year" guys like LL. Lucas may be in his 3rd year with the team, but he's just a sophomore and he's still improving at a very good rate. Look for him to get less minutes in conference play, and them commit himself to improving this offseason. He's a developing player; he'll come back stronger and quicker, and a little more polished next year barring injury, guaranteed.

that's coach Quartlebaum pictured with coach Self. not Norm Roberts