Kansas forward Jamari Traylor (31) and guard Frank Mason III defend against a pass from Utah guard Brandon Taylor (11) during the first half on Saturday, Dec. 13, 2014 at Sprint Center 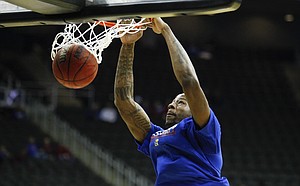 Images from Saturday's game between the Jayhawks and the Leopards at Allen Fieldhouse.

Kansas University men's basketball coach Bill Self couldn't believe that his team surrendered a 21-point lead against Utah before recovering to win 63-60 in Kansas City, Missouri. "We can screw up a good time about as well as anybody I’ve ever seen," Self said.

Kansas University forwards Jamari Traylor and Perry Ellis discuss the No. 10 Jayhawks' 63-60 win over No. 13 Utah, which featured both a huge KU lead and a late Kansas recovery.

Kansas City, Mo — Kansas University junior forward Jamari Traylor, who returned from a one-game suspension in KU’s 63-60 win against Utah Saturday at Sprint Center, had 13 points and five boards in 26 minutes. He was five of five from the line.

“He got what he deserved,” Jayhawks coach Bill Self said of sitting out following his arrest for interfering with duties of an officer at the scene of a fight. “On the flip side, he took a negative situation and didn’t pout, handled it like he’s supposed to handle it. I’m happy with ‘Mari, proud of him. I thought he and Kelly Oubre (career high nine points) were two best players for us today no question.”

Traylor said: “It’s never good when you are in that position. I made a mistake, so I just wanted to come out and do better this time around. I wanted to impact the game the way I couldn’t last time, that’s pretty much it. I had a really good game. I’m looking past me being suspended. I’m getting ready for the next game (Saturday vs. Lafayette, 2 p.m., Allen Fieldhouse).”

More news and notes from Kansas vs. Utah 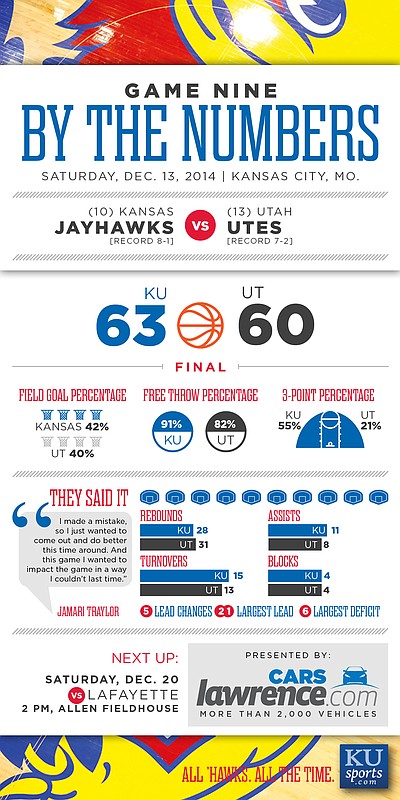 i like them jumpshots, Mari!! now you know you can shoot from 15footer, let's do more! i want to see your vertical leap ability being used. i want to see those thunderous dunks you can do. heck, maybe you can try crossing over like Wright. just do it, man! great block, by the way. Greene loves that!!

Jamari has made one jumper this season. He's bricked and air-balled a few others. Let's calm our expectations of Jamari and his offensive role on this team. He had a good game; I'll give him that.

It was reported that Jamari worked a LOT on his face up jumper over the off-season. I also remember that he specifically saved our bacon from a Mercer exit against EKY in the 1st round...dropped 17/15. What he and Elllis have trouble with is against length (KY, Stanford), and developing a face up J is the next logical step.

I dont like when people pigeon-hole a player into a role. Jamari is still improving, let's see how high he can go. I know people still groan when he attempts a J, but he's got to get live action attempts to gain the confidence and proper judgement on when to pull out such a weapon. We want him to become as dangerous as he can be. He is 6'8, ultra-athletic, and has that reckless-abandon mindset. Just needs to keep developing the skillset.

If Self's given him the greenlight, I'm all for it.

I can't recall when, but he had this crazy putback out of a miss. He had this not-super, but good enough vertical J, showing he can be 'dangerous'. Yes, confidence. he needs that. and failures after failures - call them attempts. let's make use of him, not only to pass around the ball on offense. throw him some lobs, look to pass to him off of a screen he sets, trust him!! he is qualified to score. Free Mari!!!

This game couldn't of been more perfect for him, a week after 75% of the fan base was bashing him. Hopefully it has silenced a few of the haters. I'm convinced Mari hasn't reached close to his potential, and that's an exciting thought!