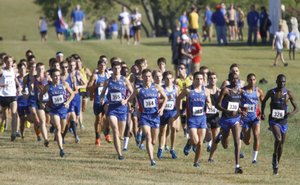 Red-shirt freshman and Lawrence High graduate Grace Morgan moved in front near the midway point of the race and never looked back for her first victory at Kansas.

In the women’s race, Morgan easily outran second-place and defending champion Samantha Watson of Oral Roberts. Morgan won with a time of 18:49.1; Watson was second in 19:19.6.

In the men’s race, Morgan, a junior transfer from Colorado State originally from Topeka, finished in 19:16.2 in his first outing as a Jayhawk. Winner Sylvester Barus of Iowa Western ran a time of 18:21.6.

Just as an FYI to the JW Staff reporters, the distance is important is this type of article.

For a man to finish in 19 minutes he would have to average a pace of about 5:06 per mile. Those are far from elite times, but certainly nothing to scoff at for competitors as young as 18-23 y/o. I've never come close to running that pace for even a single mile, but I'm proud of my marathon and half marathon finishes none-the-less.

Serious distance runners probably begin their prime in the mid 20s, but due to the nature of the sport can extend their prime well into the mid to upper 30s with proper training habits. There are lots of runners in their 40s and 50s who can still compete with the younger runners because straight line endurance running requires far less power and agility than team sports.