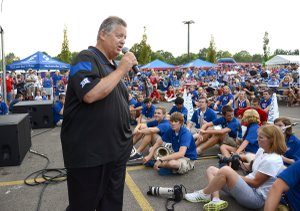 He let the fans at the KU Kickoff event dissect his rallying points and read between the lines.

“I’m not dumb enough to make my own predictions, because if I do, they’re on the bottom line of ESPN, and that’s a fact,” the third-year Kansas coach said, before adding: “Our players expect to be playing in December.”

The remark drew the largest response out of the crowd on a muggy August night, a full three months before the end of the regular season, when the Jayhawks will know for certain whether they will be bowl-eligible for the first time since 2008.

“There are guys who have been in this program for four or five years that haven’t tasted success in December,” Weis said. “Well, that’s our players’ goal.”

“You give me September,” he said, “and I’m gonna give you a reason to come in October and November. Fair enough?”

Weis has attended enough Kansas basketball games to trust the university’s fan base. He said the Jayhawks could draw 16,000-plus for a game against Hoboken Tech.

“It’s not a question if whether they’ll root for you or not,” the coach told media before addressing the crowd. “For them to keep on showing up and show up on a regular basis, you’ve gotta give them a reason.”

“Unlike the last two teams I’ve been on,” Weis said, referring to his 4-20 overall record in two seasons, “I finally have enough guys who I don’t have to say anything to, and their expectations and my expectations are the same.”

Appreciate your positive spirit Coach - but we gotta see it to believe it.

“Unlike the last two teams I’ve been on, I finally have enough guys who I don’t have to say anything to, and their expectations and my expectations are the same.”

You also finally have a legitimate offensive coordinator, or so we are led to believe.

New coaches to the staff with the addition of an offensive coordinator should make us better. Yes, we have injuries, but things happen and a staff has to overcome. There's potential but all the changes and potential talent won't matter if it doesn't equal wins.

I'm with the coach and players. Count me in come December.

For a genius, it took Weiss a long time to hire a receivers coach. But then again, he did hire a guy to run Reesing's offense for Cozart, so maybe... If McCay ad HArtwell and MUNDINE can hold onto the ball we may ok this season