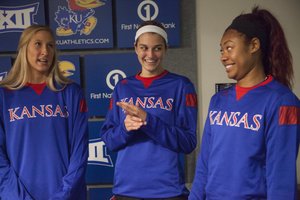 Kansas University volleyball coach Ray Bechard lost seven seniors from the first Sweet-16 team in program history, but all he has to do is pick up KU’s media guide to be reminded of the quality players returning from a historic 2013 run.

The prominent photo on the back of the promotional handbook features the match-point celebration that followed the Jayhawks’ second-round NCAA Tournament victory over Creighton last December at Allen Fieldhouse.

Outside hitters Tiana Dockery and Chelsea Albers, middle blocker Tayler Soucie and defensive specialist Cassie Wait all played in that crucial moment. And all four return for Bechard’s 17th season.

The Jayhawks expect to get tested throughout the coming months, playing a schedule that includes defending national champion Penn State and two matchups with 2013 national semifinalist Texas. After back-to-back NCAA berths, Bechard said the Jayhawks now play and prepare with expectations.

“We plan each day how to make them a little more uncomfortable (at practices) to put them in a situation where the match becomes a little bit easier for them,” Bechard, the two-time reigning Big 12 Coach of the Year, said.

The rest of the conference’s coaches voted KU the No. 2 preseason team, behind defending champ Texas. Sophomore Soucie said the Jayhawks use their accolades as motivation.

After rebuilding in 2013, Kansas soccer coach Mark Francis feels excited about not only a new offensive approach, but also a fresh start for the Jayhawks at their new home field, Rock Chalk Park.

“It was dumpy. Just that kind of stuff,” Estrada said. “That really brings your confidence down when you go out to play a team. They don’t think that your stadium’s nice, that you don’t even deserve to have a good stadium.”

Coach Stanley Redwine said the Jayhawks know what it takes to succeed.

“Our goal is to not just do well at the league meet, the conference meet (Nov. 1 at Rim Rock Farm). We want to make it to the national meet,” Redwine said.