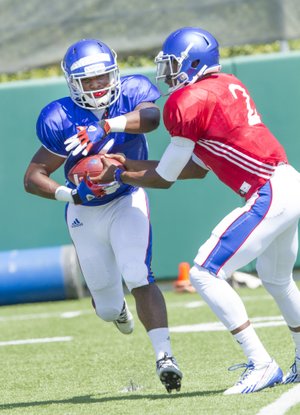 It was a screen pass. A 99-yard touchdown. The longest score in Dallas Carter High’s storied history.

And it was one of the highlights that inspired a nickname that both stuck for the next two seasons and provided an injection of confidence for a player who already had a ton of talent. You may know him as Kansas University freshman running back Corey Avery. But he also answers to “Superman.”

“That’s what people started calling me around my hometown,” Avery said during Thursday’s meeting with the media. “It was my junior year going into my senior year.”

Was it just the plays he made on the field that earned him the moniker?

Avery said the nickname hasn’t surfaced in Lawrence because “I haven’t displayed my talents yet.”

He also said he loved the alter ego from Day One and has embraced it wholeheartedly. He owns 20 to 30 Superman shirts and barely goes a day without hearing some kind of reference to the Man of Steel.

Despite being on the KU campus for just a little over two months, the freshman running back from Big D finds himself needing to deliver a big season for the Jayhawks.

The 5-foot-10, 195-pound back knows that. But it’s nothing new. Avery’s first taste of varsity football at Carter High came when he was a true freshman, just 14 years old. Since then, he has been wowing teammates, coaches and opponents at a fast rate, so much so that Ohio State, Nebraska and Texas all showed serious interest in signing him.

So why Kansas instead of those blueblood programs?

“I just felt like I could play somewhere else earlier,” Avery said. “I didn’t want to wait to play football.”

He won’t have to.

After seniors Brandon Bourbon and Taylor Cox suffered season-ending injuries earlier this week, Avery and junior-college transfer De’Andre Mann have been thrust into the spotlight. Instead of one guy having to shoulder the load, they’ll be asked to do it together. Both seem to like it that way. And both seem to have faith in each other despite their bond dating back just a couple of months.

So close, in fact, that the two players and their teammates do not sense any distance between them despite being at distinctly different points in their lives.

Mann is married, in his third year of college and 22 years old. Avery, 18, is just a few months removed from graduating high school, recently completed freshman orientation and not long ago had his high school coach call the staff at Ohio State to tell them he would not become a Buckeye.

Despite the clear differences and different styles — Mann is more of a power runner; Avery utilizes quickness and vision — the two are united in one quest.

“If he leads me or I lead him, we’re gonna do whatever’s best for the team,” Mann said. “We’re gonna add different flavors on the field. And me and him are gonna keep working hard.”

“When you get more reps, it helps out because you get more comfortable, and that’s what’s going on right now,” Mann said. “Corey’s got a lot of composure. Joe seems the same way. I know they’re gonna be ready for the moment.”

There is, of course, no substitute for actually having done it, so no matter how the next couple of weeks go, both Avery and Mann expect KU’s Sept. 6 opener against Southeast Missouri State to be intense. That was the plan all along, though.

“Anywhere that I would’ve went, I was gonna try to compete to be on the field,” Avery said. “Anywhere on the depth chart.”

Added Mann: “It’s really exciting. I just cherish the moment and try to do whatever I can to help my teammates win games this year. That’s what it’s all about.”

Good stuff as always Matt. Curious as to where the 'What caught my eye...' reports are.

We can't attend practice any longer so, when the season begins, those will have to shift back to "What Caught My Ear."

Nothing happened, just the end of summer media access as scheduled.

Hope you enjoyed them and thanks for reading!

More and more I am feeling like this was meant to be. I’ve been comparing Avery to Sims since he first signed. Not because of running styles necessarily but because he is an underrated 3 star from Texas, who, all things being equal, would’ve likely (IMHO) beaten out Wrench, the 4 star from Kansas. (In Sims case he came in and beat out Bourbon a 4 star from Missouri.) Add the fact that it’s now somewhat possible he’ll lead the team in rushing for 4 straight seasons, and might be flirting with the all-time KU rushing record heading into his senior year.

That’s a HUGE statement I know, but the framework seems to have been laid out. Reagan’s run heavy spread. The other running backs, one by one falling out of his way. The eye-opening camp so far. The potential of the offensive line under Reagan’s tutelage.

Is it obvious I’m still pretty excited about this season?

Sims was a good back because he knew how to stay healthy. He took hit after hit, and never went down.

Thats rare, especially running behind O-lines that were well below average.

Honestly, I don't think Sims is much better than a guy like Bourbon or Cox from a talent, vision, speed, and elusiveness standpoint. He was better, because he had a knack for staying healthy.

If our RBs are used too much, we risk injury, which is something we can't afford at this time.

Cozart is going to have to show some accuracy with his arm, because the percentage of pass plays are going to increase as we lose running backs.

For the sake of discussion I’m gonna single out “Talent” as the accumulated total of a running back’s skills. Those skills include vision, speed and elusiveness, which you listed, and toughness (durability) which you inferred and for this argument will be added to the total talent. I’m gonna add power to the list too, which I’m sure you’ll agree with. I also think speed should be broken into two categories. Breakaway and quickness.

So let’s grade them all out with an overall talent score. I’ll even include Miller in here for comparison. Scoring 1-10.

I’d love to take a guess at Avery and Mann, but It’ll be just that. A guess. Oh what the hell, I’ll guess.

I would love for those Durability numbers to be 10’s for Avery and Mann. To your point, and as you can see by my RBTI (Running Back Talent Index), Durability is a crucial factor.

Take Durability out of the equation and you get this.

You should develop some other indices for the QBs, WRs, and TEs.

James Sims had incredible vision. That's why he was able to avoid the big hits. James Sims really reminds me of Emmitt Smith with his running style. I really hope Sims can get a shot at the NFL because I think he could stick if he got a shot.