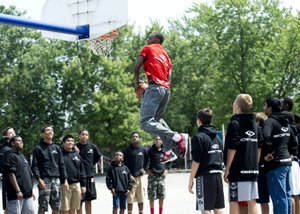 When training camp begins in October, he'll be trying to block and deflect shots in the NBA. On Monday, No.1 overall draft pick Andrew Wiggins was deflecting questions about precisely where he'll be playing.

Last week, Cleveland reportedly reached an agreement in principle to send Wiggins, Anthony Bennett and a first-round pick to Minnesota for All-Star forward Kevin Love, who will join LeBron James and Kyrie Irving to form a new "Big 3" with the Cavaliers.

That deal, which cannot be officially completed until Aug. 23, when Wiggins becomes eligible to be traded, would leave the rookie swingman playing for a rebuilding squad in the Western Conference, rather than alongside LeBron on a presumed title contender in Cleveland.

Speaking publicly for the first time since the reported deal was agreed to, Wiggins refused to be drawn in to any trade talk.

"Whatever happens is out of my control," he said. "I'm not worrying about it right now."

Surrounded by more than a dozen reporters and nine television cameras at a promotional event at his former grade school in suburban Toronto, Wiggins acknowledged that life as a first overall pick has brought him extra attention.

"There's more eyes on me, more criticizing, stuff like that," he said.

So far, at least, the glare of the spotlight hasn't been too hard to handle.

"Going to Kansas University kind of prepares you for moments like this," he said, "because at Kansas they treat the basketball players like rock stars."

After Wiggins attended Jayhawks coach Bill Self's basketball camp Sunday, Self said Wiggins told him he'd welcome the trade to Minnesota, where he could be the face of the franchise, rather than playing in the shadow of LeBron.

"Even though in a weird way everybody would love the opportunity to play with LeBron because you're guaranteed winning, for the longevity of his career, he needs to develop that mindset to be the guy, for him to be great, and I think being Minnesota will help him do that," Self said Sunday.

Wiggins wouldn't bite when asked Monday for a response to Self's comments.

Wiggins, who set numerous freshman records during his lone season with the Jayhawks, appears to be a good fit for the Timberwolves. While his defense is already NBA-caliber, Wiggins will be able to develop his offense alongside point guard Ricky Rubio in an up-tempo system.

The reported trade would break up Cleveland's trio of Canadian youngsters, with only fourth-year forward Tristan Thompson expected to remain with the Eastern Conference's new presumed power.

Wiggins said he's kept in touch with both Bennett and Thompson as the NBA rumor mill churned this summer.

"We're all close friends," Wiggins said. "We're all from Toronto so I talk to them."

No matter where he starts his career, Toronto fans are already hoping that Wiggins might one day suit up for the Raptors. The young forward refused to say much about that, either, but didn't shoot down the idea.

"The hometown love will always be there, no matter what," Wiggins said. "I try and do good for this city and I know this city tries to do good for me."

On that front, Wiggins was asked how he'd cast a ballot in Toronto's October mayoral vote, where controversial candidate Rob Ford, an acknowledged crack user who recently returned to work following a stint in rehab, is running for re-election. Even there, however, the basketball star refused to be pinned down.

"Not too sure," Wiggins said with a chuckle.

Wiggins has handled everything with class, not saying much, not offending anyone. But Bill Self is not doing him any favors with the media.

He would have said "I think that Minnesota will be a great fit for Andrew because with his personality, for him to develop into one of the best players in the League he needs to have the weight of expectations on him and he needs his team to depend on him night in and night out to be a leader and be the man, rather than just being a role player alongside the best player in the world."

I disagree. Bill is saying exactly what a team leader needs to say, but by Bill saying it Andrew can remain humble and not make the statement. It's just like in politics when a "whitehouse source" says something and then the prez whoever it is can take high road.

My guess is other players see that and greatly appreciate Self taking that role. Self could say Wiggins will be better than LeBron and then Wiggins can laugh when asked about it and say something like "I appreciate that coach, but those are some pretty big shoes to fill." he could then bring up Chamberlain at KU and how Self talked to him about that and come off as confident, but not cocky to his new franchise.

So sick of this storyline.

Yea, it's wearing thin on me as well.

Wiggs is savvy and mature way beyond his 19 years. Well done, parents.

Go, Wiggs. Jayhawk Nation will watch and support you for the duration, wherever you go.