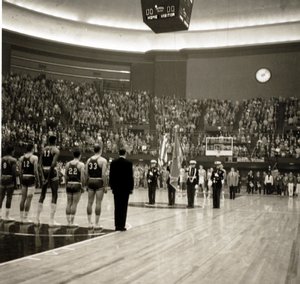 Loneski, who was a roommate of Wilt Chamberlain at KU and starter on KU’s 1957 NCAA runner-up team, was first-team all-league for three seasons and honorable mention All-American.

According to the Northwest Times of Indiana, he was the first player from Illinois (Calumet City) to play in the Indiana-Kentucky All-Star Game in 1955. He was also selected to play in the East/West Shrine Game in 1959.

During college, Loneski was involved in ROTC and upon graduation took commission.

He remained in the service for 21 years, earning the rank of colonel.

Loneski, according to the paper, served in Germany for 51⁄2 years and had two terms in Vietnam. His military distinctions include the Bronze Star for Valor, Bronze Star for Meritorious Service and the Purple Heart. Loneski became a teacher in 1980. He taught special education English at Lincoln High in San Diego for 20 years and was the basketball coach for the first 10 years. Loneski retired in 2000 has lived in Lawrence the past several years.

What a shame to lose anther KU great and a great American.

Had the pleasure of meeting him during the 100th anniversary celebration in 1998. He was generous with his time and told a few stories, including one from his days teaching Super Bowl MVP Terrell Davis in high school.

As I see more and more people living into their 80s and 90s, it seems like 77 is a young age at which to die. Just serves to remind me that nobody is guaranteed a tomorrow.

Looking at the photo included with this article, it is inconceivable to me now how the Final Four could be played in a small arena like Municipal Auditorium.

In any case, thank you, Mr. Loneski, for 77 years of a life lived well. Though you may not have won a national championship in 1957, you were a champion in the game of life. Rest in peace, and Rock Chalk Jayhawk.