Kansas University offensive coordinator and offensive-line coach John Reagan gets down to pad level with a couple of KU lineman during a spring practice in March at Memorial Stadium. 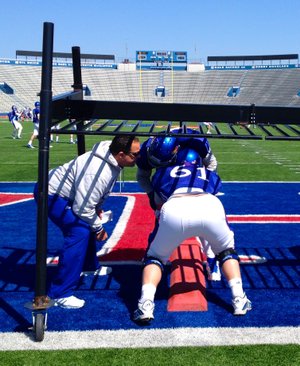 Kansas University offensive coordinator and offensive-line coach John Reagan gets down to pad level with a couple of KU lineman during a spring practice in March at Memorial Stadium.

For the past few months, people within Kansas University’s football program have gushed about why hiring John Reagan as the team’s new offensive-line coach and offensive coordinator was going to make a big difference.

This spring, I got to see what they were talking about.

To say I was impressed by what I saw from Reagan during the 90 minutes of one spring practice open to the media would be putting it mildly. I was blown away.

My plan for my time inside the gates that day was to make the rounds to every position and get a little bit here, a little bit more there and come away with a pretty solid and comprehensive understanding of KU coach Charlie Weis’ third KU team as a whole. I did that as best I could, but the offensive-line station dominated my time way more than I expected.

And that was because of Reagan.

Before you assume my attention was captured because Reagan was a ranting and raving lunatic and the decibel level coming from the O-line station caught my ear, I should explain that Reagan’s demeanor was one of the most impressive parts about his coaching style.

Don’t get me wrong: I’m sure the guy can and does go off when he needs to, but based on what I witnessed, he’s much more interested in coaching, teaching and connecting with his players than he is screaming at them.

Reagan’s instructions were incredibly detailed and direct, leaving nothing to interpretation or second-guessing. Simply put, if linemen heard him say “quick feet,” “extend your arms,” “finish the block up through the body” or any other set of instructions, they needed little time to process what he meant. During those rare times when they were slow to pick up his initial instructions, Reagan had that covered by standing within arm’s length of every player during every drill. He moved with them, often sticking his nose within inches of their helmets to make sure they heard his instructions and make sure he saw exactly what they were doing.

Every lineman, from the most experienced to the greenest, received a great deal of individual attention, and, when needed, Reagan, a former offensive lineman himself, dropped down and showed these guys exactly what he wanted them to do.

At one point, when the group was working under the 5-foot-tall metal chute utilized to emphasize good pad level, Reagan hopped under there with them and, rep after rep, put himself through some of the physically demanding tasks he was asking his players to endure.

Simply put, Reagan truly seems to care that these guys are learning and improving, and his coaching style makes it so that they cannot get away with bad reps. Provided the techniques are sound, such an approach should go a long way toward making things more interesting on Saturdays.

Reagan’s not a miracle worker. It’s not as if he could take someone like Tony Pierson and turn him into a left tackle. But he works well with guys who were born to play their position, and his track record speaks for itself. He’s produced everywhere he has worked and has a great reputation among his peers. What’s more, he has said from the minute he accepted the job to come back to Kansas that he thought the pieces were in place for KU to field a competitive offensive line immediately.

None of that will matter, of course, if the guys Reagan is coaching don’t deliver this fall. But his presence as the leader of the Jayhawks’ most unproven unit should at least give them a fighting chance.

Everyone knows (or at least should know) that Reagan is solid. Gives me a glimmer of hope for this season.

If Perkins was at that practice, Reagan would have been fired.

Wait, Perkins didn't fire Mangino until Gray-Little arrived. Mangino wasn't going to be fired if not for Gray-Little.

BGL had nothing to do Mangino getting fired. Perkins was very close to firing Mangino after the 2006 season (2 years before BGL was hired), but was talked out of firing Mangino because of how close KU was to a great season in 2006. Perkins and Mangino never got along and what happened in 2009 was going to happen at some point regardless of who the chancellor was.

At least, that's the narrative you want to push.

"… based on what I witnessed, he’s much more interested in coaching, teaching and connecting with his players than he is screaming at them."

Careful, Matt, Mangino worshipers like Doug will think you're crazy, because clearly the only way to be a successful coach is to scream and be as abusive as possible at all times. (And Doug, apparently you're not paying attention, since Matt is saying that Reagan is the OPPOSITE of Mangino, not the same.)

Reagan took a doormat like Rice and turned them into conference champions.

Furthermore, he took our mostly average Olinemen at KU and turned in multiple bowl champions.

Is Reagan the "Head Coach in Waiting"? Looks like it to me.

What, no screaming and berating players? Did we hire a o-line coach or a guidance counselor? How are they ever gonna be good without fear and humiliation? Good technique cannot come before self-loathing, as we have all seen.

I've really enjoyed watching Rice games the past couple of years (except for the two against KU) and I'm really looking forward to what Reagan can do with the offense this year. The talent discrepancy between KU and most of the Big 12 (OU and Texas excluded) isn't big enough that KU can't beat most teams on a good day. KU isn't at the point where they are capable of winning against Big 12 teams on an off day yet and with the transition to a new offensive system, even a less complicated one, will take some time.

Just remember that KU has taken every Big 12 team except Oklahoma and KState to the wire at least once over the past 3 years. That Is why I believe KU will win 4 or 5 games this year.

We played Oklahoma toe to toe last year but made some bad mistakes that ruined the effort. I think you’re right. Talent wise the gap isn’t as big as the scores have been indicating.

Of course I hated losing, but I loved that game. The gaps that Sims ran through in the first half were amazing. Couldn't believe my eyes.

Also, as of right now, KU now ranks ahead of the Sooners in recruiting by a few spots. KU is 6th in the conference right now and only 4 points behind Texas Tech. If KU goes 3 star along 2 or 3 4 star recruits with the remaining class, Kansas will likely move up into the top 30 in recruiting.

KU needs to focus on the Linebackers/DL/OL/Secondary/WR/TE, and needs to probably pick up a quality running back because Bourbon is going to be gone after this year. Wrench might come back after one year at Butler County, but KU shouldn't count on that.

You're right that Kansas played well for most of the game against OU. There were two plays that really hurt. The blocked punt for the safety and the PTA that ended up being returned by OU for 2 points. KU would have been down just 7 instead of 9 late. KU also got beat by a trick, WR pass to WR in the first half. Those plays are killers.

KU played pretty well against TCU as well on the road. When the roster is updated after all of the guys arrive today, the 6th, then we'll see a better picture of where the depth might be. After a couple of weeks a camp, we still might now completely depending on how much access the media gets and what gets reported. They can't give a comprehensive report on every practice that they are at.

One of the things that hurt us the most last year was play calling on offense. It seemed like that just when Kansas got on a roll, Weis tried to get fancy and it blew up in our face every time. I think Reagan is going to bring better creativity and consistency to play calling. If our secondary can lock down on the edges one on one, it will be much more difficult for teams to rip KU up the middle, especially with a little more experience and size in that secondary. Not to mention, if Shepard switches to NB, he'll add some speed and coverage ability.

The most important part of this season is the offense. If the offense can at least get into FG range on most drives or give our punter a chance to pin the other team deep in their own territory, then our defense will probably be fine. We need to average about 30 points a game on offense which can happen if our receiver catch the ball and if take what the defense gives, like the guy that is left open due to a double team or the guy that gets a match up advantage. Lot's of things are possible. If KU scores 30 points per game, it will likely be a 5 or 6 win season, maybe more.