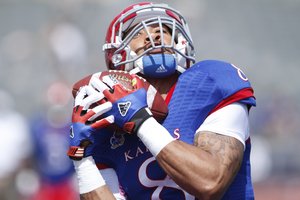 The play that killed any suspense for me as to the identity of the Kansas University football team’s quarterback this coming fall came long before Montell Cozart busted a 60-yard run, long before he found the end zone on two short runs.

It came in the first half of Saturday’s annual spring game, a half in which the first string, with Cozart and Jake Heaps rotating at quarterback, didn’t score a point against the second-string defense.

Third-and-9, nobody open, the heat on its way, time for the athlete to make something out of nothing. He started up the middle, cut back and forth and made the first down with a yard to spare.

You have a quarterback with that much smooth speed and ability to change directions, you have a chance to compete against teams with bigger, quicker, more experienced linemen than the guys playing on your side.

Cozart gives Charlie Weis’ third KU football team that chance. Jake Heaps, working for his fourth offensive coordinator in four seasons of college football, doesn’t possess the same gifts. When conditions around him are predictable, he can zip a football better than he did Saturday, but he’s not going to deflate a defense that did everything right to get into third-and-long and created the sort of chaos that down and distance should, only to be burned by a guy too quick to catch before it’s too late.

Weis didn’t name Cozart his starting quarterback after Saturday’s spring football game, but the projected depth chart sure felt that way to everybody who watched the first string defeat the second string, 20-10, and to the participants.

Cozart has the arm to make all the throws Heaps can make.

The offensive line looms as a giant question mark, which means whoever is standing in the shotgun must be ready to extend plays with his feet. Cozart is a threat to pop a big play every time he’s in that situation. Heaps has difficulty evading one defender, much less a swarm.

In name, the competition remains ongoing, but the defensive MVP of the spring game put a strong feeling shared by many into words after his eight-tackle performance.

Cozart is raw by Big 12 starting quarterback standards, but his talent slaps you in the face, wakes you up from a four-year slumber induced from watching KU quarterbacks. He’s showing more now than he did a year ago and it’s easy to peer into the future and see more in summer camp than now.

Just because teammates play and don’t pay to watch, doesn’t mean they don’t get a charge out of watching a developing young talent grow.

“Oh yeah, we need our Johnny Football around here,” Stowers said. “Jeesh, we need to get some kind of young talent around here, and I feel like that’s him over there.”

He nodded to the table where Cozart, voted the offensive MVP, gripped reporters with unscripted, youthful charm.

Then Stowers looked around and lowered his voice to just above a whisper, as if repercussions for saying too much don’t exist if his words are only read by coaches and not heard.

Born leaders don’t make fear-based decisions. They decide how to lead and that’s who Stowers is. He’s not afraid to state his opinion if he thinks doing so will drive a teammate toward self-improvement. Born leaders also lace compliments with challenges.

Cozart wasn’t looking to be named the starter Saturday and said he didn’t think it would have altered his offseason outlook.

He has a long way to go, but not as long as if he had not experienced playing in games a year ago. Cozart’s not close to being a polished quarterback, but is an exciting prospect. It will be enjoyable watching No. 2 operate as No. 1 on the KU quarterback depth chart in 2014.