Kansas center Joel Embiid dips under the bucket for a reverse layup after being fouled by Toledo center Nathan Boothe during the second half on Monday, Dec. 30, 2013 at Allen Fieldhouse. 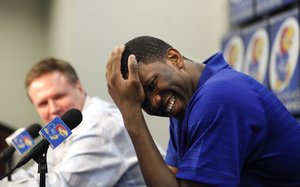 Kansas center Joel Embiid laughs after jokingly being asked to put to bed a rumor that he once killed a lion while growing up in Cameroon, during a news conference on Wednesday, April 9, 2014 at Allen Fieldhouse in Lawrence, Kan.

Every time I hear someone say that Joel Embiid will be a top-five pick in the next NBA Draft, I wonder if I have missed something.

Is Embiid actually 28, and has he been playing basketball all his life? That’s the only plausible explanation for any mystery regarding his draft projection. Top five? Top one. Period.

He’s 7-feet tall, started playing organized basketball a few years ago and has such amazing mental and physical agility that he could pass for a guard who shot Nerf hoops from the moment he was placed in his crib.

He has the perfect frame for adding the pounds and strength he’ll need to trade elbows with the double-wide trailers camped under the hoop. He already has the footwork to get around them. Embiid has a naturally soft touch, blocks shots and is extremely bright.

If he’s not ready to contribute in a big way right off the bat, all the better. The team that drafts him can pick up another lottery pick next season and a few years after that be ready to crash the party reserved for elite teams.

Embiid was a part-of-one-and-done college basketball player, but moved so gracefully and played so skillfully that he’ll be remembered more vividly than most four-year players.

A native of Cameroon, Africa, Embiid likely will be joined in the top five by a Canadian (KU teammate Andrew Wiggins), an Australian (Dante Exum) and two Americans (Jabari Parker and Julius Randle).

Exum is a 6-6 combo guard whose father, Cecil Exum, played with Michael Jordan and James Worthy at North Carolina and played professionally in Australia.

As for the top three recruits from the Class of 2013, I’d take Wiggins, then fellow small forward Parker, then Randle, a power forward already carrying an NBA body.

Wiggins played on the wing for KU and had little trouble blowing by serious athletes. Parker often was defended by slower players in the post. Wiggins has more untapped potential and figures to fill out physically more than either Parker or Randle.

28 games? Puh-lease. Joel isn't Wilt or many other KU greats. No need to spend anymore time on an individual who attended our university for 6 months. Wish him well and be done.

I don't see the point. Wilt only played 48 games for KU. That's barely a quarter of what a four year guy plays these days.

Until "the system" can be changed, we are stuck with this scenario every year. I do not like it anymore than you do.

how callous of you!! how unappreciative!! Don't speak for KU, please.

Callous? i am sure that was a joke, if not then you are

Had JoJo played 2-3 years at KU, he certainly would have the stats to back up any claims to being an elite player at KU. Barring injury, JoJo's jersey would be hanging alongside other all-time great players who have had their jerseys hung from the rafters inside AFH.

The college game has changed. Very few possible lottery picks stick around a 2nd season. Would Paul Pierce have stayed three years at KU under the current state of NCAAB? Not likely. To say Embiid is not a KU great seems short sided at best. If the current rules stay in place, 28 games may be all you get.

not true. look at Cold Alrdich and Jeff Withey- good college players, but no where close to elite talent.

There is only 1 Jo Jo in the history of KU basketball and we all know it isn't Joel Embiid. Not taking anything away from Joel's ability but Jo Jo White is one of the greatest to ever wear a KU uniform.

You cannot call Embiid a KU great that will be remembered in 10-20 years. He played 28 games and certainly was not dominant in all of the games. In some games, he was physically manhandled. I do believe that he was the difference in KU winning the conference and finishing 3rd or 4th.

Certainly, if he becomes the next Hakeem Olajawon, then his short tenure will be looked at with fondness, but I don't think it would surprise anyone if he doesn't live up to his Top 5 selection.

When people say stuff like this it makes me wonder if we were even watching the same games?! Embiid is a basketball freak and we were lucky to have him!

Keegan, you have gone back to being wrong again. Joel will be a top 5 pick this year because he is considered the best center prospect. This has nothing to do with us wanting 1-2 picks as KU players it is just the facts. I am not saying what he will be like in 5 to 10 years because that is impossible to predict. He had a very good season for us and unfortunately, he got hurt and that happens, but to be so short sided is amazing. Unless an injury concern comes up before the draft he will be a top pick.

Did you get past the headline to even read the article?

if the DMan was still on our coaching staff, guaranteed embiid stays. heck, even turner would be a lock.

If Danny was still on our coaching staff Embiid would have announced even sooner, he would be even better.

Too bad about the comment reply failure because people sure are making some stupid, ungrateful comments about this young man.

1) READ the article before you comment. Not just the headline. Keegan thinks that Embiid should go first!! not just top-5.

2) Some of you KU fans make me wonder if we were even watching the same games! Do you understand basketball at all!? How do you not understand how privileged we were to have Embiid in a KU uniform. He is an athletic freak of nature. He helped recruit Wiggins to Kansas. He will continue to be an excellent ambassador for our program. #MOJOJO (I wish we could have mo jojo)

One name missing from the fact talk who I think should get consideration is Doug McDermitt, who passed Oscar Robertson for #5 on the all time NNCAAscoring list...

McDermot certainly is a marvelous college player. The product of a lifetime of preparation, he very well may have reached his ceiling, or close to it. NBA GMs aren't looking for this kind of package. His situation is similar to Chalmers from KU -- second rounder who has become a journeyman pro.