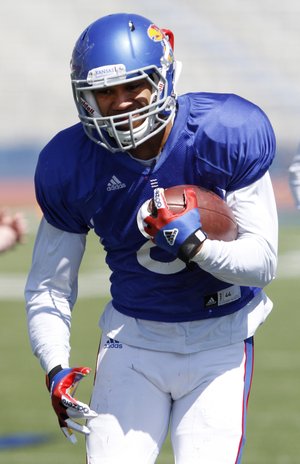 And then there are his hands. If the portion of practice opened to the media Saturday was an accurate barometer, no worries there either.

Harwell, defensive linemen Keon Stowers and Ben Goodman and backup quarterback T.J. Millweard all stood out during the morning clinic with some very special athletes. All the Kansas University football players appeared to enjoy interacting with the athletes brought to Anschutz Pavilion for a Saturday morning Hannah and Friends clinic, but if I had to select a final four for consideration for clinic instructor MVP, those would be the guys.

No need to narrow the MVP of the afternoon practice to a final four. Skip that step and present the hardware to Harwell.

Stop rolling your eyes and don’t rattle off the names of the other transfers to KU ushered in with plaudits and ultimately benched. None of those athletes did particularly well at their first schools.

Conversely, Harwell played exceptionally well all three seasons at Miami (Ohio). He sandwiched a pair of second-team All-MAC seasons around a first-team All-MAC sophomore season in which he caught a school-record 97 passes for 1,425 yards and nine touchdowns. He ranked third in the nation with 129.5 receiving yards per game. He caught 15 passes for 229 yards and two touchdowns in a game. Lest anyone question his numbers based on the level of competition, forget that, too. Harwell had 15 games with at least 100 receiving yards, including both games he played against Big Ten opponents, Ohio State and Minnesota.

In its third game this coming fall, Kansas faces Central Michigan. Good chance the Chippewas will remember Harwell. On Nov. 17, 2011, Harwell caught 11 passes for 215 yards and a touchdown at Central Michigan.

Watching the muscular receiver do nothing but run and catch kills any surprise over such startling numbers.

First-year wide-receivers coach Eric Kiesau wouldn’t have needed even that much evidence to pick the one accomplished receiver out of the crowd.

“You can by his personality, the way he carries himself,” Kiesau said earlier this spring. “He just has a different demeanor about him. Guys who have done it in the past, they walk differently, they talk differently, they want the ball in their hands. They know they’ve done it, and they feel good about it.

“Other guys are searching, ‘Hopefully, I’ll catch the balls on Saturdays.’ We’ve got to take that hope out of it. With Nick, he’s done it. He has a little different demeanor to him, a little swagger.”

Harwell takes his football work seriously. He wants to make a career out of it and is running out of time to ready himself.

“He’s probably the best in my meeting room about taking notes,” Kiesau said. “I think he has a good understanding of how the defenses work: ‘Hey, if this linebacker expands, then I can hook in front of him.’ I think he has a good base knowledge of the game, which I think will help him get in those zones and get open and have the quarterback see him and get the ball to him.”

And then he’ll smoothly run with balance, precision, efficiency, grace, power and speed. And he’ll do it over and over.

Hopefully Harwell can help our other guys step up so we can have an effective relieving corp to throw to.

draw the attention of coverage schemes away from others,

be an example for executing assignments every time.

Where is Justin McCay? Seems like he's disappeared. I mean seriously..... 5 Star 4 Star whatever. He should be playing well by now. Hope he's hitting the books.