By By Miek Helfgot/Special to the Journal-World 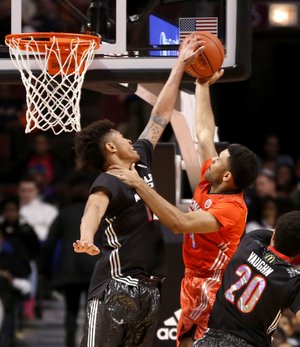 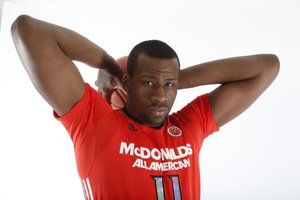 Kansas University signee Kelly Oubre, Jr., a 6-foot-7 wing from Richmond, Texas, goes through drills in the days leading up to the McDonald'a All American game. (Video courtesy of McDonald's)

Kansas University signee Cliff Alexander, a 6-foot-9 post player from Curie Metro High, in Chicago, goes through drills in the days leading up to the McDonald'a All American game. (Video courtesy of McDonald's)

Chicago — Kelly Oubre Jr. had no say in the matter the first time his life was uprooted.

The second time was not accompanied by such dramatic circumstances, and he did not question his father’s advice.

“My dad has a method behind his madness,” Oubre said. “I’m blessed to have him in my life. He knew what he was doing sending me to Las Vegas. It was time for me to get out from under his wing and become a man.”

Sin City might seem like a curious choice for a spiritual teenager to come of age, but Las Vegas Findlay Prep has proven to be a game-changer.

Founded in 2007, the high school exists as a basketball breeding ground. Already five of its alumni have reached the NBA, and 11 of its current students are Div. I prospects.

Oubre, the kid Kansas University is counting on to replace Andrew Wiggins on the wing next season, said the move from Texas to Vegas benefitted him as a player and a person.

“I don’t want to limit myself,” Oubre said. “I want to further my game and challenge myself from a competitive standpoint. We played the best competition every night and did a lot of traveling, got to see the world. More experiences, more maturity and being on my own away from my family is going to help me get ready for college.”

One of two Findlay Prep players in the 2014 McDonald’s All-American Games, the 6-foot-7 Oubre’s story is unique.

Born in New Orleans, Oubre, who scored 11 points and grabbed seven rebounds in the West team’s 105-102 victory over the East on Wednesday in the United Center, vividly remembers the August, 2005 night before Hurricane Katrina hit.

“We were contemplating leaving or staying,” he said. “My dad wanted to stay, and my mom wanted to leave. We packed our stuff the night before the storm. The severity of the storm happened, and we got out.”

They never went back. The Oubres chose Houston for reasons he did not know as a rising fourth grader and still doesn’t to this day.

There was no family there, and the transition wasn’t easy.

“We lost a lot of stuff,” Oubre said. “We lived out of a hotel for a little bit. As I look back now, it was difficult for me. It motivated me, coming from nothing, having to leave everything behind and having to start a new life.

“At the time, it wasn’t as bad. I was young. Now I look back at it as a humbling experience. It motivates me to go hard at everything I do because I can lose everything in one second.”

Overcoming such adversity has contributed to his faith in God, Oubre said, and it probably also played a role in developing confidence.

So sure of his ability to shoot, he did so often as a young player and at the expense of other aspects of his game.

He is now known as a true “three-level” scorer and is ranked as the No. 6 prospect nationally by Scout.com — one spot behind fellow incoming KU freshman Cliff Alexander, who had nine points and 11 boards for the losing East team on Wednesday.

Oubre now considers himself a scorer rather than a shooter.

“I like to get to the rack more than shoot,” he said. “My game used to reside on just shooting threes. A lot of people got in my ear and said that’s not what I need to do. I just like to play off energy and defense and get buckets.”

Oubre has no doubt that he’ll be able to step in and make an immediate impact as Wiggins’ replacement.

“Even if he would have stayed, I was going to make an impact right away because my will to win, my will to succeed is just too high,” he said. “I feel like I can’t be stopped, and it shows in my play.”