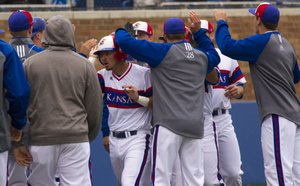 He’s known for his defense, but there might be room in Ryan Pidhaichuk’s bio for late-inning heroics after Kansas University’s 4-2 victory over Wichita State, Tuesday at Hoglund Ballpark.

The scene was straight out of a classic baseball tale. After Pidhaichuk sat on the bench for seven innings, KU coach Ritch Price put the first baseman in as a defensive replacement in the top of the eighth inning, with KU leading 4-2. After the first two Wichita State batters reached base and the Shockers put the tying run at first, all-world third baseman Casey Gillaspie ripped the first pitch he saw down the first-base line toward Pidhaichuk.

“As soon as he hit it, I thought it was going down the line,” KU catcher Ka’iana Eldredge said. “He made an outstanding play. Biggest plus play of the year. That play won us the ballgame.”

Instead of watching the ball skip past him, Pidhaichuk, a sophomore from Canada, stabbed the ball out of the air with his glove and doubled off the runner at first by simply tapping the bag.

“Be ready every play,” said Pidhaichuk, when asked what he was thinking before facing a game-changing play just three batters after coming into the game. “I just saw the ball off the bat and made a good play on it. Right when it was hit, I knew I had a shot at it.”

Inserting Pidhaichuk late in games for his defense has become common for Price, who was happy to point that out after the game so nobody would think the highlight grab was lucky in any way.

“The good thing is, I’ve been doing it all year,” Price joked. “Gillaspie’s one of the best offensive players in America and that ball was absolutely lasered. That’s a big-time play.”

Added starting pitcher Drew Morovick, who improved to 6-1 by throwing six innings and giving up two runs: “I just went up to him and said, ‘Hey, who coaches you to do that?’ He just said, ‘It’s a Canadian thing.’ That play was huge. It saved the game.”

Instead of a tie ballgame and the momentum firmly on the Wichita State side, the Shockers (16-11) were down to a runner at third with two outs and the Jayhawks (19-10) cruised to victory from there.

Next up, KU will face another in-state rival with a three-game series against Kansas State in Manhattan this weekend.

“This game was huge for us because (WSU) came off a pretty good weekend at Fullerton and this is rivalry weekend for us,” Pidhaichuk said. “We came out firing today with those four runs and we’re ready to go.”