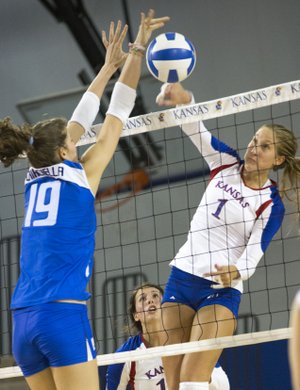 As Kansas University setter Erin McNorton walked off the Horejsi Center volleyball court Wednesday night following a five-set exhibition loss to Italy’s U-23 national team, the Plano, Texas, native mustered up the courage to utter the only Italian she remembered from KU’s overseas tour in 2011.

“I said ‘Ciao,’ to one of them, and they said it back to me,” said McNorton, beaming with pride.

The salutation was pretty much the only piece of the language anyone on the KU volleyball squad recalled from the few words they learned while on Italian soil. Luckily for the Jayhawks, the language of volleyball is pretty universal, and that allowed KU to compete with a team that head coach Ray Bechard said could do some damage at the World Championships in two weeks in Mexico.

“We got what we wanted out of this match,” said Bechard of the 21-18, 19-21, 10-21, 21-9, 15-11 loss to Italy’s professionals. “Obviously it would’ve been nice to win, but it was good to get the entire roster out there and see all of those guys work together. That was a very, very high-level NCAA team that we played against. The natural comparison would be Texas or maybe a Penn State. They’re as physical as anybody we’re going to face, just not as organized.”

McNorton and standout middle blocker Caroline Jarmoc played only the first two sets and the rest of KU’s top unit shuffled in and out of the lineup throughout Wednesday’s final three sets. The Jayhawks were not interested in taking any chances against Italy, but still appreciated the opportunity to face a stiff challenge during the week between non-conference and Big 12 battles.

“I love the experience of playing against different players,” said KU libero Brianne Riley. “And it was great that everyone got to go out there and play because they all come to practice and work just as hard as anybody else. At the same time, losing is never fun.”

Chelsea Albers led KU with 11 kills and Sarah McClinton, who spent part of the summer playing international competition in China, finished with 10 kills. McNorton led KU with 23 assists in just two sets, but Bechard said he was pleased by the play of her replacements, Kara Wehrs and Maggie Anderson.

The Jayhawks were not the only ones who enjoyed Wednesday’s match. Team Italy’s Raphaela Folie, who spoke magnificent English, said the visitors loved everything about their trip to Kansas, which also featured a five-set victory over Kansas State on Tuesday.

“Both teams played a good match,” said Folie, who revealed that the North American tour marked the first time in America for her and many of her teammates. “They have a very good level of volleyball at this university and we liked so much the (KU pep) band because in Italy, that does not exist.”

Because Wednesday’s clash was considered an exhibition match, it did not count on KU’s record and the Jayhawks will take a 10-3 mark into conference play. Getting one last chance to regroup before diving into play in one of the toughest conferences in college volleyball was welcomed by everyone in a KU uniform.

“I liked the no-pressure aspect of it, for sure,” McNorton said. “Especially because, with Big 12 starting, we have all the pressure coming towards us and it allowed us to get into the (flow) of the Wednesday-Saturday match schedule.”

KU returns to the court at 1 p.m. Saturday, when they play host to TCU in the Big 12 opener.

Don't let the score fool you, these girls are GREAT!

Agreed. Purely exhibition. We won’t be sitting Jarmoc and McNorton during conference play.

Wow things are turning around.

The coach got a chance to see how all the players will function, had the chance to look at different combinations and the ladies got the chance to again gain great confidence by playing a quality opponent while experimenting. The best of luck to you ladies, you are ready to take down the Longhorns--RCJH.