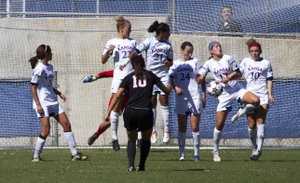 Kansas University soccer midfielder Liana Salazar is happy with how her team’s offensive players dealt with a bit of pressure.

After getting shut out in three straight games heading into the weekend, the Jayhawks delivered their second straight two-goal effort Sunday, posting a convincing 2-0 victory over Illinois State at Jayhawk Soccer Complex.

“We’ve been working so hard this week, practicing shooting and how to create opportunities,” Salazar said. “It’s just reflected in how we played.”

KU coach Mark Francis also could tell his team’s practices had paid off, as the Jayhawks did a better job Sunday of connecting passes from their midfielders to their forwards.

“We’ve been creating a lot of chances,” Francis said, “but I thought the quality of the chances today was better.”

KU broke through in the 31st minute.

Forward Caroline Kastor made the decision to take the ball to the outside, following the team’s scouting report that said ISU’s back line would be compact in the middle and vulnerable on the perimeter.

The senior then made a quick cut by a defender to the inside to clear space for a cross. After teammate Ali Kimura deflected it, the ball fell at the feet of Salazar in the center of the box, and she blasted a one-timer into the left side of the net, dropping to her knees while pointing both index fingers to the sky to celebrate her second goal of the season.

“Liana was in a great place,” Kastor said. “She finished it really well.”

KU goalkeeper Kaitlyn Stroud kept ISU (5-6-0) scoreless at half with a pair of standout plays.

In the 33rd minute, she blocked two consecutive point-blank ISU shots in the box before a third try was deflected away by KU defender Madi Hillis.

Then, in the 40th minute, Stroud dived to deny a shot from the Redbirds’ Rachel Tejada, who received a cross into the box from teammate Kyla Cross.

“She’s a phenomenal goalie,” Kastor said. “She came up big-time for us.”

The Jayhawks added to their lead in the 65th minute.

Once again, Salazar was in on the play, as she delivered an accurate pass to the right side to set up a one-on-one opportunity in the open field for Ashley Williams.

The sophomore forward delivered, sneaking a roller to the right of ISU keeper Aryn Newsom and into the left side of the net to make it 2-0.

Afterward, Francis called it his team’s best game of the year. Not only was he happy with his team’s defense and bench energy, but he also left pleased that his team remained unfazed in a physical game that included four yellow cards for his team — the most in a game for KU in four seasons.