Kansas kicker Matthew Wyman watches his 52-yard field goal sail toward the uprights for a 13-10 win over Louisiana Tech during the on Saturday, Sept. 21, 2013 at Memorial Stadium. 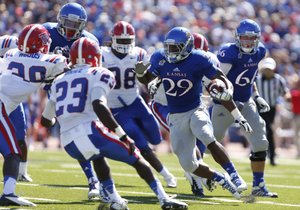 With a diamond earring drilled into each lobe, Matthew Wyman looked a little bit like a rock star Saturday afternoon when he sat in the room where post-game interviews happen. Earlier, you could tell he wasn’t because even rock stars don’t trigger quite as wild a response as he did from teammates in the center of the Memorial Stadium field and again in the locker room.

I guess he is. Russell Hammond was almost famous. Matthew Wyman is famous. His rapid journey has taken him from the most anonymous player at the beginning of training camp to, well, famous. This from a former soccer player whose high school football career in Michigan spanned all of four games and included just one field-goal attempt. It was blocked. Saturday’s had a decidedly different result.

In a game that had been dominated by the left foot of one punter, the right of another, Wyman’s right foot took the spotlight when he booted a 52-yard field goal as time expired, lifting Kansas University to a 13-10 victory against visiting Louisiana Tech.

A year ago, when Kansas had as feeble a kicking game as just about anybody in college football, Wyman had to pay for admission to games. The first one he attended, he said, was the second of the year, against Rice.

“I was sitting about two-thirds of the way up and I remember saying, ‘Man, I can do that.’ I was (sore, as if he had kicked himself backward), I guess I would say, at the beginning of the season.”

Wyman’s first attempt at walking onto KU’s football team failed. He made the team last spring and during a strong summer steadily climbed from fourth on the depth chart to first as the team’s field-goal kicker.

Wyman entered the game 1-for-2 in attempts, making a 45-yarder and missing from a similar distance.

When Wyman missed wide right from 28 yards midway through the second quarter Saturday with KU trailing, 7-0, the Wyman story had the feel of another experiment gone awry from a football program with a history of backfires.

Wyman took a seat on the bench and “drilled myself for a little while.” That was when, according to Wyman, reserve safety/prophet Deron Dangerfield voiced a message he would repeat a couple of quarters later: “You better be ready. It’s coming down to you. The game’s coming down to you.”

Wyman made his next attempt, from 39 yards in the second quarter to KU within 7-3 at the half.

Wyman said with 10 minutes left in the game Dangerfield again had words of encouragement: “He said, ‘The game’s coming down to you. Start preparing.' So I started preparing.”

“I visualize a lot,” Wyman said. “My dad has always told me to visualize. I do that before I kick. I picture it going through the uprights. That’s about it.”

He said he kicked into the net twice before heading onto the field. Louisiana Tech coach Skip Holtz tried to ice the novice by calling timeout. To Wyman’s grandparents, who had made the trip from Oxford, Mich., it must have seemed like the longest timeout in history.

“I was thinking, ‘I do this in practice every day. I can do this.’ You’ve got to be confident to be a kicker,” Wyman said. “That’s what was going through my mind: ‘I’m going to make this kick. I’m going to drill it.’ I always talk myself up before I go up there.”

He said these words also popped into his head: “Just because people are watching doesn’t mean I won’t make it.”

He said he knew he hit it well. Is it true what they say about time slowing down when the ball is in the air, the game on the line?

“Yes,” Wyman said. “It definitely does.”

His first thought after he struck the football: “Please go in. I saw it going to the right and then it kind of curved back in.”

He said he thought Andrew Turzilli was the first to reach him as the kicker’s arms were spread, his fists balled, his mouth screaming, “Yeah, let’s go!”

Somebody, he couldn’t remember who, picked him up and placed him down and that’s when Wyman fell onto the ground and soon found himself at the bottom of a dog pile.

“For a second my leg got caught, but I got it out,” Wyman said. “I was actually worried that I was going to get hurt. … They finally got off of me, I ran over to the student section and they gave me a warm welcome.”

A rock star’s welcome from a guy who was one of them a year ago, wearing a blue T-shirt with the rest of them.

“It’s weird knowing that I was up in the student section, cheering, saying, ‘I know I can do this.’ And now I’m here in front of all these cameras,” he said. “It’s a lot to take in. It’s been a short period of time.”

It’s some story is what it is.

“It’s cool coming from the bottom of the depth chart to the starting field-goal kicker,” he said. “I guess it doesn’t happen often. It’s cool that it’s my story, not someone else’s.”

Not a rock star, maybe – but, for sure, a ROCK CHALK star.

I think he may get the chance for a reprise in a conference game, and I'm pretty sure he'll be "prepped up" when that time comes. At least I think he's getting meals at the training table for the next two weeks.

Kinda shows what today's 'journalism' is all about.....

Gimme a break. Nick Krug should be writing his own captions anyway. You know how many pictures and captions he deals with for a game? How fast he has to get those in? It’s harder than you think.

Typos slipping through are not unique to modern journalism. Grammar Nazis with anonymous aliases are.

at least KU got the when

I saw that, too, and wondered who writes the captions.

You might not believe that journalists should know basic things like spelling and grammar, but some of us do.

almost all writers use voice recognition software to write for them now. They mostly all just dictate. The editors are supposed to catch these things, but they mostly rely on spell check/grammar check, because they are too busy to catch everything. I don't know if the editors really would look at the photo captions, anyway.

I guess he was really cooking, huh?

One change for him this year is he will have to stay until the end of the game instead of following students out at halftime. Just kidding.

Great kick under tremendous pressure. May have saved our season.

That's what college sports is all about. Hopefully this is what this team gels around. I want to root for the alma mater before basketball season. Intent of being good is insufficient. I live in SEC country, so there's a different expectation. I'll be a fan as long as we're above .500.

Expectations aside, you do realize SEC will have exactly as many conferemce losses as they have conference wins – and so will the Big12, don't you?

Since I couldn't get the game, I watched "Invincible", the movie about the Philadelphia bartender fan of the Eagles who got a shot at open tryouts under Dick Vermeil to play. Similar story, in that he watched them from the stands one year, and then the next was an actual player. Papele had 3 seasons with the Eagles - hope we can get the same from Wyman.

I was preparing myself for OT. I don't know what coach said but I was thinking, look Matthew, its 52 yards. We won't lose if you miss it and no one will blame you if you do. No pressure.

Wow, kicking game is so much better. Good to see.

Wyman was great but Pardula was spectacular.

Wyman is an example to us all. Pay your dues, never give up on your dream, and you will be rewarded.

Here's the video of the kick. Courtesy of KU Athletics. http://www.youtube.com/watch?v=HyYWj5lsFmk&feature=c4-overview&list=UUuurB9cwATPco9D2IJTXSNg

Diamond earrings? Does he also have an over-sized New York Yankees cap?

I can't remember a more thrilling or unpredictable win in KU history. I thought we were going to win big. Instead we got a big win. The fans, coaching staff, and players should enjoy it.

The words "thrilling" and that game should not be mentioned together in the same sentence.

I'm going to call it a poorly played, lucky victory. I mean come one, they handed it to us. Sure hope Weis figures it out soon.

That kicker sure can kick though!!!