Kansas running back Tony Pierson (3) stews on the bench with some of the other running backs and receivers after a deep pass to him was ruled incomplete late in the fourth quarter against Rice on Saturday, Sept. 14, 2013 at Rice Stadium in Houston, Texas. 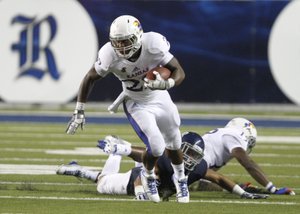 Houston — If football were not a team game, the Kansas University defense would have thrown a party following Saturday's game at Rice Stadium and the offense would have flown home in silence.

Unfortunately for the Jayhawks, who fell to 1-1 on the season and saw their road losing streak balloon to 23 consecutive setbacks, football is a team game and a great night for the KU defense went down as a wasted effort in a 23-14 loss to Rice.

Series after series, quarter after quarter, the KU defense gave up just one touchdown and three field goals to the high-powered Rice offense that has averaged 30-plus points per game for the past couple of seasons. But KU's offense gifted the Owls seven points on an interception return for a touchdown by Michael Kutzler and, perhaps worse than that, could never get in a rhythm to make what the defense did count.

“You hold 'em to 16 points, that should be good enough to win,” KU coach Charlie Weis said outside the Kansas locker room after the loss.

It wasn't. And, although the Jayhawks stuck together and pinned this loss on the entire team, the offensive players seemed a lot more apologetic about struggling to score 14 points and gain 270 yards in their second straight loss to Rice in front of 22,974 fans, many of them wearing crimson and blue.

“Oh yeah, it hurts,” said KU senior James Sims, whose 109 yards on 19 carries moved him into fifth on KU's all-time rushing list and represented his 12th career 100-yard night. “The defense did a great job out there. They got stop after stop and we gotta capitalize on that.”

Added quarterback Jake Heaps, who threw two interceptions and completed less than 50 percent of his passes, a stat that was more on his receivers and their rendezvous with the dropsies than his inaccuracy: “Our defense did a great job and they put us in position to win the game. Offensively, we just couldn't get going.”

Despite being out-performed in most statistical areas, the Jayhawks trailed just 10-7 late in the first half — Heaps hit Tony Pierson for a 77-yard TD early in the second quarter — and had the ball near midfield with a chance to tie or take the lead heading into halftime. But on the first play of that drive, Heaps' deep ball toward Justin McCay was intercepted by Bryce Callahan and, two minutes later, Chris Boswell's 28-yard field goal put points on the Owls' side of the scoreboard instead.

“Yeah, that was big,” Weis said. “But it wasn't nearly as big as the one that went to the house early in the game.”

Added Heaps: “We were trying to take a shot and it didn't go the way we were hoping. In fact, it was the exact opposite. Big things like that are the things that lead to losses and we gotta make sure those things don't happen.”

After the two offenses traded missed opportunities throughout the third quarter, KU took its first lead of the game on a one-yard TD plunge by Heaps. KU's second touchdown of the night was set up by two fantastic individual efforts, the first an interception from junior safety Isaiah Johnson that gave KU first and 10 at the Rice 16 and the second a third-down pitch-and-catch from Heaps to sophomore Tre' Parmalee that reached put the Jayhawks inside the 1.

Another KU interception — this one by Dexter McDonald as Rice was threatening — gave KU possession at its own 6-yard line with the lead.

“We really thought we were gonna take it from there,” Heaps said. “And we just couldn't. They won the field-position battle all night.”

After recording one first down, KU punted and the boot from Trevor Pardula was partially blocked. Weis argued that Rice should have been whistled for a penalty on the partial block, but the officials disagreed. Six plays later, Boswell, the same kicker who hit a game-winner as time expired last year in Lawrence, drilled a 56-yarder to give Rice the lead back.

“I felt the guy went over the shield, which would be a penalty (and an automatic first down),” Weis said. “They said he went through the shield. He has a much better view of it than I did.”

Despite falling behind once again, KU remained alive until Rice tailback Charles Ross (27 carries, 157 yards) scored from eight yards out with 3:28 to play to set the final margin.

“Really, the bottom line is you have to tie together consecutive plays and, on third down, when the quarterback hits you in the chest, you need to catch the ball,” said Weis, lamenting KU's dropped passes. “You know that, I know that and the players know that, too.”

In the minds of the Jayhawks, the trip back to Lawrence was supposed to be filled with smiles and sighs of relief after moving to 2-0 and getting the burden of that road losing streak off of their backs. Instead, it was a trip that began with KU trying to explain what went wrong and why this year would be different than all of the others that began in similar fashion.

“It's over with,” Sims said. “It's behind us. We gotta move on and worry about Louisiana Tech. We're gonna bounce back from this. This is just a bump in the road.”

Added Heeney, who led KU's defense with a career-high 15 tackles: “It's disappointing, but we're gonna regroup and get ready for next Saturday. It's not gonna spiral. We're gonna be ready next week.”