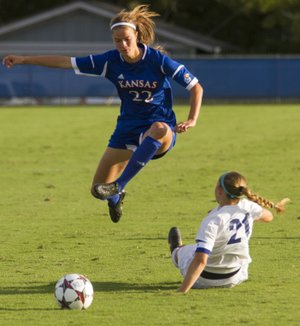 Kansas' Caroline Van Slambrouck (22) leaps over San Diego's Kelly McCoskey (21) as she goes after the ball during their soccer match Friday at the Jayhawk Soccer Complex.

The Jayhawks outshot San Diego 17-6 over the final 70 minutes but were unable to score for the second straight match.

“I thought we played well today, but it was just a couple of mental errors that did us in,” KU coach Mark Francis. “I really liked our team’s mentality in the attacking third of the field, but it was just one of those days when we couldn’t find the back of the goal.

“There’s still a lot of soccer still to be played this year and, if we play like we did today, there’s no question we’ll win more games than we lose.”