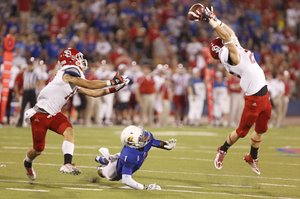 It was South Dakota’s secondary, not Oklahoma’s or Oklahoma State’s or Rice’s. The pass fell incomplete, and we’ll never know if the overthrown target would have caught an accurate throw and taken it into the end zone. But when the topic is Kansas University and its wide receivers, it’s best to embrace encouraging signs where you can find them.

No. 1 Rodriguez Coleman slipping behind the Coyotes defense and attempting to make a diving catch, coupled with the way Kansas coach Charlie Weis has talked about him since he started practicing, tickles the imagination. Might he be the deep threat this team so desperately needs to complement possession receiver Justin McCay?

On the first-quarter play, Jake Heaps stepped up in the pocket and threw the ball 50 yards in the air when all that was needed was 47 yards.

“The entire night, that’s the only real throw that Jake would want to take back,” Weis said. “Ran right by him, overthrew him by a few yards. I was actually glad to see a receiver lay out to try to catch the ball. He’s a guy — you can’t just force-feed him, he’s got to earn the time — he’s on the cusp of taking a meteoric rise up the depth chart.”

Cornerbacks, including Conference USA preseason defensive player of the year Phillip Gaines, are the strength of Rice’s defense. It will be much tougher to beat them deep, but that doesn’t mean Kansas won’t try, especially if the Owls cheat to crowd KU’s running game.

“At juco, I never had a receivers coach,” Coleman said. “We were learning from each other. I feel coach (Rob) Ianello is teaching me well, my routes, how to run them, how to attack the defender.”

The touchdown goose egg for KU receivers in 2012 drew national attention, but the drought has been in the making for a few years. JaCorey Shepherd led Jayhawks receivers with three touchdowns in 2011, and Bradley McDougald and Daymond Patterson shared team honors with two in 2010. For comparison purposes, Dezmon Briscoe averaged 12 TD catches in his final two seasons, and Kerry Meier averaged eight over the same period.

“I feel I can help be a deep threat and make plays when the ball is in my hands,” Coleman said. “I feel I can be that type of receiver.”

Coleman made the biggest catch of the season for Garden City in 2012, setting up the game-winning field goal in the Broncbusters’ 31-29 victory against Co-Lin in the Mississippi Bowl. Coleman was on the ground when he caught a tipped ball, good for a 62-yard gain.

“That was my most memorable catch in junior college,” Coleman said.

His next catch will be his first for Kansas, likely the first of many.

Oh boy. Only we can declare a receiver who got one target all night that was over thrown our deep threat solution. Some times being a KU football fan can be sad. Really sad.

I hear you. My thoughts exactly. We don't even know if McCay is a solid possession receiver--yet anyway.

The photo would indicate at least 2.

Probably should have saved this article a week or two until, you know, Rodriguez makes a catch in a KU uniform. Also, I read the headline as deep throat. :-/

Well, this is indeed encouraging.

A few things that were not mentioned that might make us salivate even more:

1) The weather was hot and humid - it will be better in weeks to come.

2) The lights were probably in his eyes.

4) The South Dakota defender had new shoes, so he could run faster, jump higher than normal.

5) There were too many people in the stands and Coleman was distracted.

Josh Ford is a more likely deep threat. Too bad Weis shut down Michael Cummings and Josh Ford during the spring game.

Maybe you didn't pick up on it while you were cheering so wildly. Charlie's script obviously called for Jake to get all of the kudos.

Rice is a must win game. We better beat Rice.

Michael Cummings has not won one game for KU and will most likely never start another game at KU (barring injury). Jake Heaps is 1-0.

Cummings will be the #2 QB on our depth chart for a long time. His completion percentage was lower than Crist, he threw more interceptions than TDs. He struggled at the D-I level (yes as a freshman, but he has to show improvement, especially with other QBs tranferring to KU to play for Weis...3 and counting).

As for Josh Ford, I don't even think he made a catch last year.

You have to earn your time and it is clear Coleman was behind when it came to route running, but he admits he needs help and is working forward.

Ae we really arguing over the possibility of more than one deep threat @ WR?

Ianello is a great recruiter. But the jury's still out on his abilities as WR coach. I saw NO improvement from the WRs last season. And this season? Well, they can block downfield well (which is important) but still can't get separation and run crisp routes. I suppose that could be the players, but at this point you have to start questioning the coaching.....

Separation is the key.
I'm sure this is a coaching issue as our receivers were never even open during the TG era. (Can't stand to even mention the fraud's name.)

Lets hope he lives up to the hype. He hasn't even caught a pass this season.

That photo is not of the pass that is mentioned in the article. Coleman was targeted twice in the game.

All I have ever heard during my 60 plus years of watching football is "the run sets up the pass"......well, our strength is our running game SSSSOOOOOO,..run, run, run,....play action...bomb...TD!!

Pierson and Coleman run blazing go routes. Heaps steps into a 70 yard rocket that leaves an arching contrail and connects with either receiver for the score.

Should open things up a bit...

OK, this is three times the google questions have run me through a whole series of questions and then told me no more questions for a week. Yeah, right. Very next article, another question.

This is a pointless topic. He didn't do anything last week to garner consideration. Until Heaps and Coleman get in sync this is a mute point. All this week we have discussed that receivers are still dropping the ball.

We need more from our receivers to say we've got good receivers. As of now Ford has shown me the most while McCay finally broke our receiver catching a TD streak. I am encouraged that the passing game is getting better, but continued improvement is needed. Not to use a certain state motto without throwing up, but show me. Rice is a better team and I hope we are getting better to go 2-0.

For the love of God, the word is "moot". One mutes their TV.

Of all my commentary you focus on one word mishap.

No, one mutes his TV, unless he is muting some other people's TV.

The title of this article should be - Question: Has KU football found its deep threat?

An opinion should be a statement, not a question. In my opinion......

When Coleman make plays, don't change ur tune.. Weis knows what talent is. He's in practice with boy everyday, he also has watched film on this kid. I'm just sayin, the boy was over thrown on 1 play. and was wide open in another occasion. Will see...