When Milt Newton was finishing up his graduate studies at Kansas University, he told anyone that would listen that his goal was to one day become an NBA general manager. 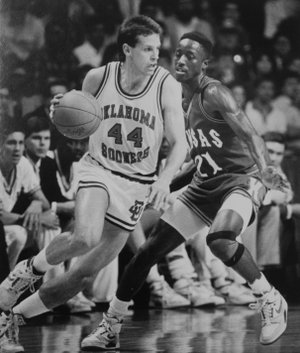 Oklahoma's Dave Sieger attempts to drive around KU's Milt Newton during the NCAA title game on April 4, 1988 in Kansas City, Mo. Sieger, known as the Sooners' top sharpshooter, scored 22 points in the 83-79 loss, including seven three-pointers.

It took him 22 years to get there, but Newton has finally arrived. That the opportunity is coming in the place where his wife grew up and under the man he befriended while they worked together in Washington made it worth the wait.

Newton was introduced as the new GM of the Minnesota Timberwolves on Tuesday. He was hired by president of basketball operations Flip Saunders, who coached the Washington Wizards when Newton was an executive there.

Even after spending 10 seasons with the Wizards, most recently as vice president of player personnel, Newton said leaving wasn’t a difficult decision. He was anxious to come to a situation where he had greater influence in the decision-making process and more authority to put some of his fingerprints on the organization.

“My role will change in that, along with Flip, I’ll have an overall effect on the organization,” Newton said. “In Washington I was mostly in the personnel aspect of the organization. This is a very much more expanded role and I look forward to the task at hand.”

Newton’s wife went to high school in the Minneapolis suburb of Minnetonka, and his father and both in-laws were present at his news conference on Tuesday, a rare turnout of family for a front office appointment that underscored how big the day was for Newton and his family. He choked up a bit when thanking his parents for instilling work ethic and integrity in him as a young boy and smiled when asked if he ever even considered passing up the job when Saunders offered it.

“Preventing my wife a chance to come home? I’d be divorced,” he joked.

As part owner and team president, Saunders will still have final say on all major basketball decisions — “I will have ultimate authority,” he said — and continue to serve as the face of the organization’s executive branch. But bringing Newton in was another significant move to reshape the structure of the Timberwolves’ front office in the wake of David Kahn’s firing earlier this summer.

Kahn put scouts all across the country and, after parting ways with assistant GM Tony Ronzone two years ago, there was no established pecking order below him in the front office. That led to confusion and disorganization, and Kahn’s lack of a basketball pedigree also hurt him in his communication with his coaches and other executives across the league.

Saunders has made it a point to bring the scouting department in-house and is empowering a layer of officials just beneath him that have strong basketball backgrounds. Newton played on the 1988 national championship team at Kansas and worked with USA Basketball and the NBA Development League. Longtime executive Rob Babcock will also soon get a new title and more responsibilities to handle the team’s salary cap and budget after being marginalized by Kahn over the previous four years.

While there will be collaboration among all sections of the front office, it appears that Newton will be more heavily involved with personnel evaluation, scouting and roster development.

“Milt’s going to have a lot of authority and it frees our whole organization up to do a lot of things,” Saunders said. “It frees me up to do some things from a business perspective and he does have an expanded role from what he did have in Washington. He will have a huge voice.”

It’s exactly what Newton has been working for over the past two decades.

One of my favorite Jayhawks. Congratulations to Milt Newton. Will never forget his performance in the 1988 Championship Game.

Impressive. These jobs are not come by easily. Rock Chalk, Milt! We are proud of you!

Congratulations to Milt Newton on a well-deserved new position!

Congratulations Milt on never giving up on your dreams and working hard to make them come true.

Still have the "Miracles" on the DVR from when Milt, Danny, & even Larry B. were still pups. What an accomplishment! All these kids that fly through now should really take a hard look at just what doors that degree can open. One of the greatest success stories of the modern KU hoops era. If kids leave here still thinking like a bag of hammers-it's really their choice.

Rumor is he will be a yes man to another hands on owner, but to the tune of around 3oo-400 grand per year. Damn the luck! Must have a great sense of how to structure & run a business though, or he wouldn't be there at all. May have been the same at WSH also, but maybe the price was right there too.

The Vice President of Player Personnel doesn’t exactly make or break a team’s winning percentage. He didn’t hire the coaches and he didn’t do any coaching. He didn’t even have final say on player personnel.

That makes two GM's from the same college team...Pritchard with the Pacers and Newton with the Timberwolves. I would think that has to be history making..

What could truly be history making is that all four (Newton, Pritchard, Ferry, and King) were all on the court together in the '88 semis.

I'll never forget his up & under "wrap-around" layup in the '88 Championship game.

I think I was out in the driveway the next morning trying to imitate it. And thousands of times after that.

One of my favorite KU players.

Milehigh, that move has become legendary in my mind, as the way I recall it is that he did that "up and under" while he was floating across the lane. I still tell my brother that his feet never touched the paint! The Milt-O-Meter was totally pegged out after that play! Dude had serious hang time, making him one of my all-time faves also.

What is this Google junk? Is this the entire article?: "When Milt Newton was finishing up his graduate studies at Kansas University, he told anyone that would listen that his goal was to one day become an NBA general manager...."

I cannot read anymore because some Google junk is in the way. This is obscene. I am not answering their questions. I am assuming that everyone else sees this too, or is it a virus on my computer? When I read on my iPad, no problem... so far.

Where the F have you been the last 2 months?

Add another tally to the Milt-O-Meter! :-)

This article has the word Wiggins in it http://www.grantland.com/story/_/id/9659500/the-long-road-ahead-charlie-weis-kansas-football

Very, very cool. Two NBA GM's off of the 88 Championship Team and one D-1 Head Coach. Who would have thunk it? Congratulations Mr. Newton.

No such thing as a "former" Jayhawk,,, Once a Jayhawk,, Always a Jayhawk!! Rock Chalk!!

I hate copying anything UT does, but the operative phrase down here is "Lifetime Longhorn" for ex-players. "Lifetime Jayhawk" has a nice ring to it, in my opinion.

I would prefer "Veteran Jayhawk"