UA gets even with KU volleyball 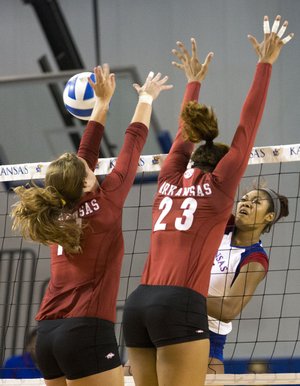 After two Kansas University-Arkansas volleyball matches in the last three days — encompassing five hours of action — only one thing has been established: The Jayhawks of the Big 12 and Razorbacks of the SEC appear to be clones of each other.

Arkansas (4-2) avenged Thursday’s five-set loss to KU (4-2) in Fayetteville, Ark., by dropping the Jayhawks by the same 3-2 count on Saturday in Horejsi Center.

“It’s a different format for sure,” KU coach Ray Bechard said of the home-and-home series just a few hours apart. “Instead of playing a lower-RPI team, Robert (Pulliza, UA coach) and I decided, ‘Hey, let’s strengthen our schedule by just going back-to-back. They made some adjustments. We made some on some of their players, and in the end it turned out to be a really good match again, just not the outcome we wanted.”

“Go two out of three?” Bechard said, asked if he wished the two teams could meet again. “I guess if we do that, it’d be the NCAA Tournament so that would be great. Obviously, we are extremely disappointed. We worked as hard as we did to get the win on Thursday. They came out here and did the same thing to us.”

These teams, which are 4-4 against each other all-time, also met last spring for practices/scrimmages in each others’ gyms in accordance with NCAA offseason rules.

“Yes, I’d like to beat them again, but we have played Arkansas so many times that I am just ready for other opponents, really,” said KU senior Caroline Jarmoc, who tied junior Sara McClinton for the team lead in kills with 18.

As it did Thursday, KU rallied from 1-0 and 2-1 deficits versus Arkansas to force a fifth set.

“The two matches were eerily similar, because it was 10-10 at their place and 11-11 here in the fifth,” Bechard said. “We lose two games, 25-23, 26-24, and win one game very easily and one game so-so. Arkansas is a good team. They made a number of plays, and we can be a little cleaner in the end. Obviously, we can learn some lessons from today.”

KU freshman middle blocker Tayler Soucie had 12 kills off of a .435 hitting percentage. Senior setter Erin McNorton had 56 assists. The Jayhawks had three players reach at least 10 digs, led by senior libero Brianne Riley, who had 20.

KU, which is unranked, will travel to No. 19 Creighton on Tuesday for a 6 p.m. match.

hard loss to swallow...would have been great to sweep an SEC school....would have really bolstered the NCAA bid.

at Creighton on Tuesday....would be a nice comeback victory. Go Jayhawks!