Kansas University track athletes Michael Stigler, left, and Andrea Geubelle were named athletes of the year at the Rock Chalk Choice Awards on Sunday, Sept. 8, 2013, at the Lied Center. 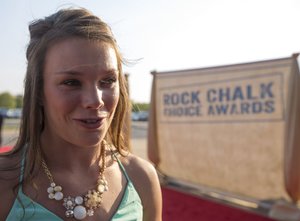 Andrea Geubelle stops to speak with the media on the red carpet during the Rock Chalk Choice Awards Sunday at the Lied Center. 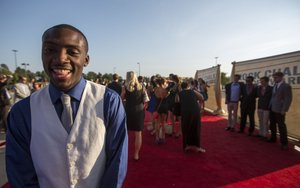 Michael Stigler stops on the red carpet to speak with reporters during the Rock Chalk Choice Awards Sunday at the Lied Center. 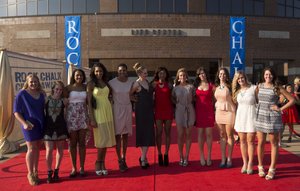 Members of the Kansas University volleyball team pose on the red carpet outside the Lied Center Sunday before the Rock Chalk Choice Awards. 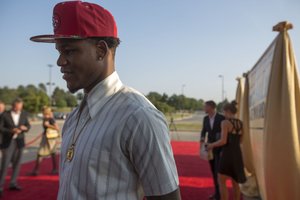 Ben McLemore stops to answer questions on the red carpet during the Rock Chalk Choice Awards Sunday at the Lied Center.

A record-breaking year for Kansas University’s track and field teams was capped off with a clean sweep of the final three awards during Sunday’s Rock Chalk Choice Awards at Lied Center.

“For track to get recognized like this, it’s great,” Stigler said. “That means we’re up on the rise, just like the basketball team, so we’ve just got to continue doing what we’re doing.”

In her final season as a Jayhawk, Geubelle won two Big 12 championships, a pair of NCAA Indoor championships and also was first in the triple jump at the USA Track and Field Championships.

“Winning a team championship, I couldn’t have imagined any other way to end my collegiate career,” Geubelle said. “I’m proud of my team, proud of my coaches and honored to be a part of that program. I’m really excited for their future.”

Stigler, just a junior this season, finished second in the 400 meter hurdles at the 2013 NCAA Outdoor championships. He also is a two-time Big 12 outdoor champion in the event and holds the school record.

“He hates to lose — at practice and at competitions,” Geubelle said. “He overall just leads the team. You can watch people follow him, and he will never have to say a word.”

“It’s unbelievable the things they were able to accomplish,” Redwine said, “because they put their work in.”

McLemore, who was taken seventh overall by the Sacramento Kings in this year’s NBA Draft, attended the event alongside former teammate Naadir Tharpe.

Wearing a red San Francisco 49ers hat (San Fran is about 90 miles away from Sacramento), McLemore said he was beginning to settle into his new locale. He recently secured a place to stay in Sacramento and has started to get acquainted with his new teammates and coaches.

“I’m definitely enjoying the process right now,” McLemore said, “and ready to start up and get this thing going.”

Other award winners at the hourlong Rock Chalk Choice Awards were:

• Football halfback Tony Pierson, who won the Crimson Climb Award, given to the an athlete “who has served as an inspiration to others by overcoming academic challenges and exceeding academic expectations.”

• Volleyball libero Brianne Riley, who picked up the Jayhawker Award, given to an athlete who exhibits commitment to KU principles while demonstrating “mental toughness in the face of adversity and competition while making a positive contribution to Kansas Athletics.”

• Volleyball setter Erin McNorton, who won Best Jayhawk in a Supporting Role, given to an athlete who “demonstrates extraordinary sportsmanship, support and loyalty to teammates and Kansas Athletics.”

• Rower Abbey Lozenski, who was honored with the True Blue Award, given to an athlete who “demonstrates devotion to excellence in academics and athletics while advancing Kansas Athletics through participation in various student organizations and community service projects.”

Congratulations Andrea and Michael ~ A well deserved individual recognition for each of you, as well as for the historically incredibly successfully University of Kansas Track and Field program. You, and each of your teammates have made significant contributions to that tradition.

As a Jayhawk living in Eugene, about three blocks from Hayward Field, site of the last two Olympic Trials and last springs NCAA track championships, I have to say AMEN!! to the Lady Jayhawks winning the NC in track & field as the Jayhawk Moment of the Year!!!
To come into Eugene, home of the Ducks, on their hallowed home field, and win was an amazing team effort, and I hope that it's the beginning of a long and illustrious track dynasty at KU.
I have read people on this site gritch about the track around Memorial Stadium, and I can't see what the problem is. Hayward Field was originally a small football stadium, and the local powers in track and Uncle Phil knight would like to try and have the World Championships in track held here. But there is the little problem of a lack of seating at Hayward. At the last Olympic Trials, even with massive temporary bleachers, they could only seat about 21,000.

If a Memorial Stadium were here, we'd be hosting the Worlds next year. Maybe KU can expand their track program, steal away some of Haywards cachet, and end up hosting the WORLD Championships in Track & Field!!! In yer face, Phil!!

That would be Big Time International Rock Chalk!! Hey, it never hurts to dream big, my fellow Jayhawks!!!

And here I always thought GB meant Green Bay from my neck of the woods!

And the award for biggest drain of academic department dollars goes to...

I am so happy for these two deserving track stars. It has been really great to watch KU track return to greatness. Andrea, I've said it before. You belong on a box of Wheaties. RCJH

I love reading these stories. Great to see student-athletes from multiple sports recognized. I'm sad that the departed seniors won't get to compete at the Rock Chalk Park, but they should always be proud knowing they were a part of making it happen.