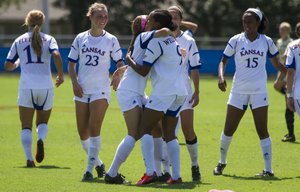 Kansas University soccer coach Mark Francis had no idea how this experiment was going to work.

On Saturday, he introduced his team to a 4-3-1-2 formation. Drew it up on a chalkboard. Explained it to his players and hoped for the best.

Needless to say after a 4-1 victory over Purdue on Sunday at the Jayhawk Soccer Complex, the new strategy might be sticking around awhile.

“If it didn’t work, we’d just switch back to our regular formation. No big deal,” Francis said. “But as the game went on, you could just tell it was working really well for us.”

While employing a 4-3-3 set earlier in the year, Francis feared that his team’s best offensive players might have been stifled by a formation that wasn’t allowing them to be creative with the ball.

KU’s offense seemed to thrive with the new setup Sunday that moved midfielder Liana Salazar into a more attacking role. The Jayhawks matched the number of goals they’d scored in their previous three games combined (four) and also posted season-highs in shots (23) and shots on goal (13).

“I think playing them this way is going to be harder for teams to defend us, because there are people moving all over the place,” Francis said. “It’s harder to keep track of them.”

The Jayhawks struck first in the 19th minute, when KU forward Jamie Fletcher was fouled in the penalty box to bring on a penalty kick. Salazar knocked the PK into the right side of the net, giving KU a 1-0 lead.

KU followed with a pair of goals off quick counters. Following a long boot from keeper Kaitlyn Stroud in the 36th minute, Ashley Pankey sent a pass ahead for Ashley Williams, who rolled a shot into the left side of the net.

Then, in the 59th minute, Fletcher delivered a long bouncing pass ahead to Caroline Kastor, who needed just one touch to blast it into the right side of the goal to make it 3-0.

“Fletcher played me an unbelievable ball; I think she did most of the work,” Kastor said. “I just ran onto it and tried to compose myself and finish it.”

Two minutes after Purdue scored its only goal on a penalty kick, KU answered in the 85th minute. Kastor sent a cross from the right side to Courtney Dickerson, who headed it into the left corner of the goal to complete the scoring.

“I think the goal for this weekend was to score and to have attacking opportunities,” Salazar said. “I think changing the (formation) of the team, that helps me and especially Fletch to get the ball more to have the freedom to move everywhere on the field.”

Though not perfect — Francis said some additional tweaks were needed defensively with the new set — KU’s back line allowed only a goal against Purdue’s powerful offense. The Boilermakers (2-2) were held to their lowest scoring total of the year after averaging four goals per game through their first three contests.

KU (3-1) will play Arizona in the Sun Devil Classic on Friday in Tempe, Ariz.

Rock Chalk, and good luck against Zona on Friday!