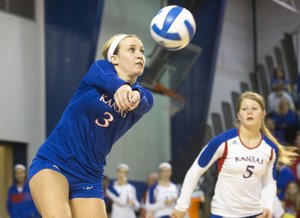 “A bunch of people went home. They all went with their families. Usually we don’t leave each other’s side. It’s kind of a problem. This time we were on our own,” joked the Dallas native, who Wednesday passed the 1,000-assist mark (1,026) for the second straight season.

Senior Caroline Jarmoc, who battered Baylor with 14 kills against just one error with six blocks, also remained in town with no practice scheduled Friday afternoon, Saturday and Sunday.

“I don’t have $500 to throw at a plane ticket,” said the Calgary, Alberta native whose two solo blocks tied her with Texas A&M’s Amber Woolsey for second all-time on the Big 12 career list (96). Team USA player Destinee Hooker of Texas holds the conference record with 132 solo blocks. “I think everybody took the break as an opportunity to recover a little bit,” Jarmoc added. “We are all responsible women. Everybody came back with a nice improvement.”

“It’s been a while since we played and we weren’t happy with the last result,” KU coach Ray Bechard said. “We wanted to bounce back and play well. I think we made Baylor feel us in all phases. From serving, to blocking, to attacking — that gets to be a little bit overwhelming if (the opponent) can’t find a phase of the game that’s clicking at a high level.”

And in case one is wondering what the 16th-year KU coach did during his rare weekend off ... “I recruited. I watched some video. I watched a little Jayhawk football and watched the Cardinals (his favorite team in World Series). That’s relaxing for me, I guess,” he said, smiling.

KU will next meet TCU at noon Saturday in Fort Worth, Texas.

Nice job Hawks! It was only by accident that I happened on to the ESPN televised game. I guess I need to pay attention to the website. Girls made this game look easy. Baylor was clearly overwhelmed.