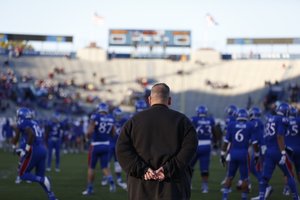 Decision making of Coach is not his strongest suite. He needs to make up his mind about a QB and let him develop. Coach needs to get emotions out of this if we have to improve. I feel that Cozart has the most upward potential. Coach needs to stick with Cozart through the Freshman mistakes so he is a much better player later in the season, or even beyond.

I agree. Cozart needs to be handed the job going forward. Heaps isn't what we need at quarterback. He is a pocket passer and we don't have the line for that nor the receivers. Gawd has it been that long since Meier and Briscoe were here??? I hope Weis gets us some big bad lineman and A couple receivers. Let's face it we need a lot of help as most of our key players will be seniors next year. Our line graduates all but 2 so we're no where near to a point where we can say fixed. With how bad we are on offense I'm pretty worried going forward. Hopefully we can grad a good high school running back this year and next and maybe a JUCO guy. Weis and company better be hitting that recruiting trail like mad. My two sense not that I said anything enlightening.

I think that our O Line will continue to improve with each game as long we we don't move everybody around anymore. Howard threw some bad snaps, and we were luckily that Cozart was able to maintain possession of them, and we missed some blocks and missed some blitzes, but overall the line looked quite a bit better this week than it has all year.

As far as the line graduating all but two, you are talking about after next year right. We will return 6 out of 10 on the 2 deep after this season. And Lewandowski, Fusimalohi, Admire, Smithburg, Fondal, and Damon Martin will all be seasoned veterans. I wouldn't expect any recruits to come in and start next year unless they arrive for the spring semester, and I thought that I read somewhere that a new Juco transfer rule would make that much more difficult.

I thought we lost Howard and Lewendowski to graduation as well as Sterling?? The two deep is fine but the same 5 starters would be great. If I'm wrong about those two graduating that would be great!

I was 1/2 right we lose Howard and Sterling

Yes, Howard and Sterling will graduate. Hopefully Admire is a capable center. Sterling has been good but he wasn't good enough to keep his job at LT. I expected more from Sterling than what we've gotten. For a 6'5" 325 lb guy who reportedly moves like a running back after shedding 75+ lbs, he just never seemed to pan out as a premiere NFL caliber LT. He may still get a shot based on his size and athleticism, but I'd like to see him start blowin up some huge holes for our backs.