Baylor running back Lache Seastrunk celebrates a touchdown — one of many — against Iowa State. The Bears and their awesome offense beat ISU, 71-7, a week ago in Waco, Texas. Next up, Baylor will take on Kansas at Memorial Stadium. 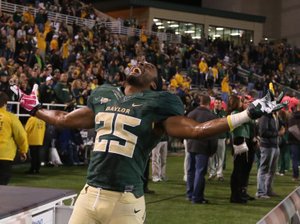 Baylor running back Lache Seastrunk celebrates a touchdown — one of many — against Iowa State. The Bears and their awesome offense beat ISU, 71-7, a week ago in Waco, Texas. Next up, Baylor will take on Kansas at Memorial Stadium.

Baylor leads the nation in the following offensive categories:

Baylor features the Big 12 leader in the following categories:

With sixth-ranked Baylor and its 714 yards and 65 points-per-game averages in Lawrence for a 6 p.m. kickoff against Kansas University, it’s only natural to wonder if looking at BU’s statistics or watching the film was a more trying experience for the Jayhawks this week.

Earlier this week, during KU’s Tuesday news conferences, linebackers coach Clint Bowen, who coordinates the defense, said being asked to prepare for BU coach Art Briles’ offense in one week could lead to nightmares.

Briles, who has worked with the same offensive coordinator for more than 20 years and had success from Texas’ high school venues to the University of Houston and now the Big 12, has his own way to describe it.

So talented is the Baylor offense that an entire page of the Bears’ weekly game notes — third from the front, no doubt for effect — is dedicated to the dozens of categories in which Baylor leads either the country or the Big 12.

Beyond that, the Bears (6-0 overall, 3-0 Big 12) lead the Big 12 in 14 offensive categories and boast the conference’s top rusher (Lache Seastrunk), passer (Petty) and top two receivers (Antwan Goodley and Tevin Reese). The Bears’ ability to gain yards and score points makes them tough enough to game-plan against. The fact they do it all at a breakneck pace makes the task even more daunting.

“Their tempo is as fast as anybody’s ever gone in the Big 12,” Bowen said. “There comes a point where you can only go so fast, and I think they’ve gotten to that point.”

The Jayhawks who spent hours watching Baylor torch opposing defenses and light up scoreboards this week during film sessions each seemed to have a different word or way to describe the offense they’ll attempt to slow down tonight.

“Mind-boggling,” cornerback Dexter McDonald said. “No doubt about it. Because you never know what to expect. It’s unbelievable some of the stuff they do and how they put these points on the board.”

Added linebacker Jake Love: “They’re very efficient. They put up about 70 points a game, so you’re kind of in awe. But we just try to focus in on what we’re trying to take away and how we can do that the best.”

That’s where the film work has come in handy. Rather than fear what they saw, McDonald and fellow-cornerback JaCorey Shepherd both said the impressive film clips of Baylor’s high-powered offensive machine made them excited for the opportunity to prove their own skills.

“It’s definitely something that you hate seeing because you know it’s capable of happening,” McDonald said. “But I think it’s something you should watch over and over again. For me, I’m looking at it like, ‘Oh, wow, I wouldn’t have made that mistake,’ or, ‘Wow, I want to face this guy.’ I’m a competitor, and I’m ready for any challenge.”

Added Shepherd: “I don’t get psyched out at all watching film. I’m ready for the opportunity to go against some receivers and an offense like this that’s the top in the country. I’m ready. Just all the talent they have. They’re very explosive, and any player, any time could take it to the house if you’re not doing your job.”

“A donkey’s never gonna win the Kentucky Derby, and you can’t ask him to,” Bowen said. “So you gotta be smart with what you’re doing and how you play things. There are ways to play wideouts without getting into a foot race with ’em.”

I have really liked the defense this year. Despite the miscues we have had on offense (and some on special teams) the defense seems to have made a dramatic change.

With that said, this will be a very messy game. I won't even be mad if we get blown out. Baylor's just really good. Hopefully we'll finish the season well and pull out a win against ISU or KSU or both. Next year we have 18 returning starters plus newcomers. I can be patient.

Clint Bowen... if there was ever a donkey on this team it would be him.

Not trying to change your opinion or judge your comment, but Bowen is a huge reason -- if not the biggest -- that this defense has shown so much improvement this season.

Never understood the knock on him. Successful everywhere he's been, including KU, and a guy who would give anything for KU. You'd think that would be someone fans appreciated, heck maybe even loved.

Maybe it was his work on our defense...

Or maybe it was his fine work as special teams coach...

Not trying to be a wise guy but tell me what units that Clint Bowen has been directly responsible for that have been successful. There might have been a small stretch somewhere in there with Mangino. I like the way the kids are playing this year but let's be honest, Ben and company were already playing good last year while Clint was making a circus out of our special teams.

Clint is a handsome guy who as you mentioned has always been a KU guy and who the kids seem to like and play hard for. That is why he has a job here. It is not because he has the ability to coach a unit up to be greater than the sum of it's parts.

Baylor football has become to the Big 12 what Oklahoma basketball was to the Big 8 in the late 1980s.

Thirty-one. Those are the number of games we have yet to suffer under the leadership of Weis.