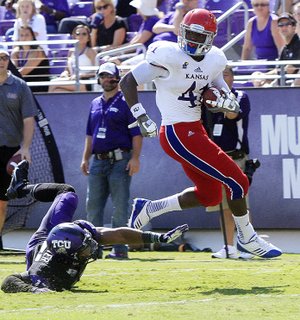 The Big 12 Conference victories remain elusive, the offense has become a major point of frustration, and the defense continues to be asked to do too much.

But there are coaches and players inside the Kansas University football locker room who can see rays of positivity through the storm clouds.

And the aspect of coach Charlie Weis’ second KU team that emits the most light just might be its mind-set and mental toughness, which was called upon often during Saturday’s 27-17 loss at TCU.

With Kansas having played arguably its most complete half of the season, the Jayhawks and Horned Frogs entered halftime tied at 10, with the visiting team considering the possibility that perhaps that would be the day the 22-game Big 12 losing streak and four-year road skid would end. Six minutes into the third quarter, the scoreboard read TCU 24, KU 10, and things appeared to be headed the wrong direction in a hurry. Yet somehow the Jayhawks faced first-and-10 situations throughout the fourth quarter with the chance to drive for the game-tying or even game-winning score.

They never got it done, of course, but for Weis that was not the point — at least after the game.

“You learned a lot about the team (by) how they handled the first five minutes of (the second half),” Weis said. “It’s (TCU) touchdown, (KU) turnover, (TCU) touchdown, and losing teams at that point throw in the towel. They say, ‘That’s it. Here we go again, we’re gonna lose by 50.’ And the next thing you know, you score a touchdown, now you’re down by seven, and it’s anybody’s game until late in the fourth quarter.”

That the Jayhawks (2-3 overall, 0-2 Big 12) hung in there on the road with a quality Big 12 opponent is all anyone has asked of this team. So, on the surface, a 10-point loss to a perennial 10-game winner does not appear to be reason to panic. But it’s not so much that the Jayhawks are losing as it is how they’re doing it that has folks frustrated.

KU’s offense, which is averaging 18 points and 305 yards per game and drawing most of the blame, is full of players who know where this team’s biggest improvement needs to take place.

“I feel like this is all on the offense,” said junior tight end Jimmay Mundine, who scored KU’s only offensive touchdown Saturday. “To get more points on the board, we’ve got to figure out something to do that.”

Inconsistent offensive-line play, ineffective wide receivers and bad throws have plagued the Jayhawks’ offense at times. But Mundine said he and his teammates know that dwelling on the past and what hasn’t happened won’t help them in the future.

“We just got to continue to fight,” Mundine said. “We can’t lay down and let guys feel like we’re a practice game or something like that because we’re really a talented team. We just have to put it all together on offense. The more points we can score to give our defense a break and some juice, the better they’ll do.”

The way quarterback Jake Heaps sees it, his teammates already have shown signs of that.

“This was really frustrating,” Heaps said after the loss to TCU. “But I’m really proud of our team coming from last week and the way that game went (a 54-16 home loss to Texas Tech) to how we came out and we battled and we fought against a good team like TCU. I think there (are) positives that you can take out of the game. We brought back a physicality that we haven’t had as an offense that will definitely help us going forward.”

It better. This week, the Jayhawks welcome an angry Oklahoma team to Lawrence for a 2:30 p.m. kickoff at Memorial Stadium.

I frankly don't believe those who say it is a talent problem on the offensive side of the ball. There is no reason to think that Weis and company were any worse at recruiting OL and offensive skill players. Therefore the better performance by the defense must be the coaching in my opinion.

It is time to settles on a starting offensive line and make it work through execution and technique. Heaps is fine at quarterback. I actually think that he passes better on a rollout than sitting in the pocket. Rolling out may allow more WR's to work open.

If we can't make the offense work with these players, I recommend getting new coaches for the lineman, the receivers and the offensive play calling.

Somehow I feel that Oklahoma will be better prepared OFFENSIVELY than KU will be. Quite frustrating when Weis is suppose to be an offensive guru. How many years will it take??

agreed. Given that they already lost to Texas, they will be out looking for blood. At this point, weis needs to play to keep the beatdown to a minimum as opposed to going for the win. If we lose this by 3 TDs, that will be a victory imo.

Not exactly sure how one measures 'better prepared OFFENSIVELY' ~ given the difference in the two teams talent level ~ but guess that wasn't the real point of the post ~ was it.

I have an opinion that is in the process of waxing as we speak. Michael Sillman said it first, above. I'm not so sure that the problems we are seeing points to a talent problem. I have to back off of earlier statements I've made about the personnel being a problem. It may be, but I'm growing convinced that the biggest issue is that position by position, kids aren't being coached well. Man, I hate to say it. But it's obvious Jake Heaps could improve. Not a bad kid. Has a good head on his shoulders. He just isn't ready to play quarterback. When I look at the O-line, I say to myself, "these kids are getting pushed off the ball AND they don't know what they're doing" Then it dawns on me that both problems are rooting in coaching (strength and position). The receivers have ditched Heaps when he put the ball in their hands. Position coaching. And the play calling I think has been sub-par. Head coaching.

Maybe...just "maybe"...we need to start asking Weis the tough questions. Of course he's such a talker...

Hiring Charlie Weis was a risky move. There really was nothing in his background that indicated he would be all that well suited for a project like turning around KU football. The Notre Dames teams got worse each year especially after the players he recruited played. His one year as OC at Florida was far from successful.

But as you say, Weis is a good salesman and we bought into his pitch. That is not to say there won't be improvement and there is no reason to make a coaching change until at least after Year 3 and probably Year 4.

Yeah, I kinda got the impression that Dr. Z was in a position of desperation when Weis was hired. I would not be surprised if Weis or some middle-man initiated contact. I used to think that the old experienced coach was the way to go. Fulmer, Tubberville and Harbaugh would have been my favorites. Not so sure now. A number of young coaches are doing really well.

What exactly gave you the impression that it was through desperation? This wasn't like the Nebraska hire of Bill Callahan where the public knew a whole list of people had been contacted and turned it down. Was it just because you thought it was a bad hire?

By many pundits, the hiring of Charlie Weis was considered on of the poorest hiring decisions by any university making a coaching change. I'm sure the word desperation was used a time or two to describe the decision. This was a very important decision and at the time, I thought it was a very strange hire. I liked everything he did and said before the first game last year. I could see where the writers and followers of the team looked at him as refreshing, but the product on the field has not improved enough to make us competitive and that is on the coach. I go back to my earlier post- what has Coach Weis done in the past that makes anyone think he can turn around the KU football program?

I tend to agree Zenger had his eyes on Mike Leech who strung him along and went to Washington state He brings in a guy who ran one of prolific offensive numbers schools in today's age and coached them to bottom feeders in all of college football. Excuse was they couldn't grasp his offense. News flash you font pay these kids roll with what you have. He couldn't get the ball in two of the youngest game breakers in the nfl Demps and Rainey hands and he blames the kids. If you font gave wr to get it or a online to pound it you spread the d out and get ya players in space. The Koop aid on HCCW was poured on thick with extra sugar.

Defense and kicking looking good. Hire an offensive Coordinator and put Charlie up in the box to watch. He can lead the team, speak for the team and recruit Just an Idea!