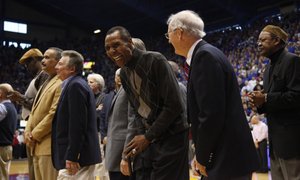 “An Evening With Former KU Coach Ted Owens,” featuring the man who ran Kansas University’s basketball program from 1964 to ’83, is scheduled for 7 p.m., Sunday, Nov. 3 at the Kansas Union Ballroom.

Former KU standout Bud Stallworth, who played for Owens, will introduce the 84-year-old Tulsa native, who following a speech will sign copies of his new book, “At the Hang-up: Seeking Your Purpose, Running the Race, Finishing Strong.”

The 270-page book includes 25 life lessons from Owens, plus the coach’s thoughts on his life and career with lots of pictures.

The foreword is written by current KU coach Bill Self.

“Coach still lives life. I’ve been on golf trips with him, have been his roommate and have had the opportunity to get to know him very well,” Self writes. “He is so competitive. He is in great shape and we have walked probably 15 different courses together, from St. Andrews to Pebble Beach. He hates to lose and usually rigs the bets on the first tee to ensure he doesn’t. ... I’m proud of you coach for becoming an author. But on the next golf trip, I’m getting strokes and please don’t feel you have to get up at 6 a.m., every morning to do your exercise. I could use the extra shut eye!” Self adds.

Self has much more to say about Owens in the foreword, including revealing the fact he phoned Owens, Larry Brown and Roy Williams, his three living predecessors, on the day he was introduced as KU hoops coach.

“I can only hope my impact in the world can rival Ted Owens’. I am proud to be his friend,” Self said.

He’s going to be given every opportunity to earn a position on the team as backup to Tyson Chandler.

“I want him to be a little tougher,” Knicks coach Mike Woodson told the New York Daily News. He was upset with Aldrich during his zero-point, three-rebound performance (in 5:26) on Friday versus Toronto.

“When you are trying to make someone’s ballclub, bigs (have) got to do dirty work. They’ve got to be nasty and take hard fouls and rebound and do all the dirty work that helps you win games. I’m not seeing that a lot right now in him. He’s got to pick it up some,” Woodson added.

Aldrich, who turns 25 on Halloween, responded to the Daily News: “What he means by that is if you’ve got a guy coming to the rim, go up and make a play at the ball. Try to block a shot, try to do the little things that will anchor our defense. ... There’s an opportunity (to make the team). The biggest thing is using training camp to continue to get better, get used to the system, get used to the guys.”

Tyshawn Taylor hobbling: Former KU guard Tyshawn Taylor of the Brooklyn Nets hurt his right ankle in the first half of Saturday’s loss to Detroit. He’s upset that the injury comes with Deron Williams missing exhibition games with a sprained ankle of his own.

“It’s an opportunity,” second-year pro Taylor told ESPN New York. “Deron’s definitely going to be sitting out two games and I might be sitting next to him now.”

“We’re trying to develop and get on a meal plan, so that way I can gain some weight,” the 7-foot, 222-pound Withey said recently to NBA.com. “I know during the season you’re going to be playing so much, you need to have that weight so your body doesn’t break down. I want to be in great shape. Even if I’m not as heavy as I want to be, that way I can outrun people, out-quick them. I know I’m not going to be the strongest guy on the court during my rookie year, so I want to be able to beat guys down the floor.”

He moved to New Orleans in early September and found a place in the Warehouse District, the website said.

“It’s a nice area,” Withey said. “I already know my way around. … So far I like it a lot and I’m really getting to live the New Orleans lifestyle.”

If Withey can't gain weight while living in New Orleans, he's just not eating. Geez, I gain about five pounds every time I travel there for a couple of days!

They were probably scared off by having to reveal their true identities.

No more HEM, Jaybate, it's the end of a commenting era

I for one will not miss Jaybate. His/her posts were long-winded, convoluted, and took up valuable space on this site.

I find it strange that you comment about them using an alias to avoid using their real names to protect their professional and personal identities, yet you used an alias?

You are aware of the change LJW made to these pages, right?

Coach Owens' team of Lopes, Wesley, Lewis, Jo Jo, Roger Bohnenstiel and others was maybe one of the best ever. I'd like to see the stats from that period within the Big 8.

I didn't even know KU had a basketball team from 64-83, so someone tell me, was Ted Owens good, bad, or so so? I know he wasn't phog, roy or bill, but how was he? Final fours? Regular contenders for the league?

Jack, you've given me two smart aleck answers today. Not sure why. Of course I could google KU, I'm looking for people's memories of the man that don't show up on Wikipedia.

I really hope they consider changing the website back. This is really taking away everything I loved about this website. Having intelligent conversations about ku basketball, reading about peoples interesting opinions or the latest recruiting buzz was the highlight of this website, Not the stories you could easily just pick up a paper and read.

Problem is it wasn't KUSports.com that caused these changes to happen. Unfortunately, this change came about because of politics. I'm not blaming one side or the other because it's people on both sides of the political spectrum that lack respect for differing view points and view those who don't agree with them as the devil. If you want to know why these changes happened, it's because of the political articles that always turn into each side blaming the other for the problems in this country.

I'll be honest, I don't miss the snark and mean-spirited posts that people felt comfortable posting when they were anonymous. I appreciate the accountability.

What's the big deal with having a name and face to your posts?
HEM was/ is one of the best posters on this site, having to reveal his real name shouldn't deter him from posting. A true loss

It is entirely possible what I posted as tongue & cheek sarcasm on the Mario story about the NSA or IRS wanting our contact lists may actually be true. Tonight this story is on msn, http://news.msn.com/us/report-nsa-collecting-millions-of-contact-lists Also thieves, stalkers, & hackers can abound with a tiny, tiny bit of one's personal information as well, so anonymity certainly is preferential for those whom wish to remain vigilant. Think about it, it doesn't take very much. If your child or friends post on social media that your family is enjoying a night out for dinner, for a game, or whatever, a thief may just walk right in & waltz right out with all your family jewels in their own little bag. What has occurred on this blog may actually be out of LJW's control, but no matter what or why, it's pretty much destroyed this fan blog for those of us who read & enjoy it many times on a daily basis. It would be like shooting off their foot for LJW to do this on their own, & I can't imagine that. Readers are money to them, plain & simple. And furthermore, I'd like to go on record right now & say many of our frequent board rats are much better writers, wits, & analysts than the employees who right these stories. Also take note that the LJW is just one of the many blog sites that have adopted this recent requirement & that, in itself, is enough for me to cry conspiracy theory. Some of the posters here have been extremely funny through the years. Oh well, just one more thing to cross of the to-do list for tomorrow & the days to follow, but I'll sure miss the "fanships" we've had on this board... RCJH...

Hopefully they'll find the work-a-round and bring life back to the boards. Or else, I'm going to have to start faking basketball knowledge :) -Blown

I'm about halfway through Ted's book and I'd give it a thumbs-up. Did you know Ted Owens is a national champion baseball coach? He won it all at Cameron in a story you have to read to believe. It'd be a good Christmas gift for kids to give to their dads who might remember the Owens era.