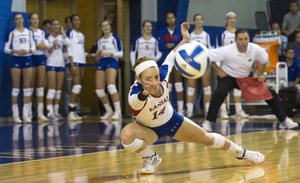 “I mean, I’m disappointed,” Jarmoc said after the Longhorns — the country’s No. 1 team in RPI — downed the No. 14 (RPI) Jayhawks three sets to one in a battle for sole possession of first place in the Big 12 Conference.

Texas standout Bailey Webster, a 6-foot-3 senior from Baltimore, had 20 kills on a night the physically imposing Longhorns, who have defeated the Jayhawks 19 consecutive times, totaled 17 blocks to KU’s six.

“It’s frustrating when you swing, (and) the ball comes back at you, but we all have the skill to be able to change that,” said Jarmoc, who had 12 kills, second on the team to Sara McClinton (16). “We just have to make those changes sooner.”

It had the makings of a thrilling night in Horejsi after the Jayhawks overcame a 15-9 deficit to win the second set and tie the match, 1-1, entering the break.

However, Texas’ Haley Eckerman, a 6-3 junior, won three points off her strong serves to open the third set. KU did rally from a 16-10 deficit to cut the gap to 22-19 before the Longhorns closed set three with a 3-1 run.

“Texas played well. Webster was terrific. Khat Bell (10 kills) was very good,” KU coach Ray Bechard said. “We never could get into a rhythm. They dictated tempo for the most part.

“The disappointment was we had a pretty good comeback in (set) two, then kind of a sluggish start in three. I learned long ago you credit your opponent for a lot of the things they make you do,” he added. “We were a little out of character at times. We got blocked 17 times, had a lot of hitting errors. We went on a good run (10 straight wins). They took it to us a little bit tonight. We’ll bounce back. We need to have a good week next week (at Texas Tech on Wednesday and at West Virginia Saturday).”

Bechard didn’t think there was anything wrong with KU’s mental frame of mind against the defending NCAA champs.

“We were ready to play. Texas was better tonight,” he said. “When they are clicking, they present some physicality issues, obviously. When you go against an elite team, you have to make adjustments. We just needed a better response after the break.”

The Jayhawks insist this won’t derail their season.

“Coach B said the biggest disappointment is if we don’t learn from this,” said senior Erin McNorton, who had 42 assists. “Hopefully, we’ll take what happened tonight, work on it at practice, then head over to Lubbock and hopefully get a big win there.”