TCU not happy with offense, either 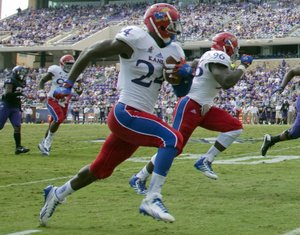 Fort Worth, Texas — The football coach at the podium in the wake of TCU’s 27-17 victory Saturday against Kansas University was asked a question about his defense being put in a bind because of the performance of his offense.

“I’ve been in a bind since I started here,” the coach said. “ ... We’ve just got to play better. Who knows how good this group could play if we move the football and get done what we need to get done.”

The coach at the podium’s name was Gary Patterson, in his 16th year at TCU and 13th as head coach, but the words just as easily could have been uttered by KU’s coach, Charlie Weis.

Patterson didn’t like the performance of his offense, which turned it over five times, but he wasn’t apologizing for winning.

“First Big 12 win in (Amon G. Carter Stadium) by the way, just so everybody understands the little things,” Patterson said. “Give Kansas credit, they played hard on defense and got some turnovers. We didn’t hold on to the ball.”

“He wasn’t able to get real comfortable back there in the pocket,” TCU defensive end John Koontz said.

The Horned Frogs were able to apply that pressure on Heaps, even though their main focus was stopping the run.

“We knew they were going to try to out-physical us and try to run the ball, so that’s definitely something we focused on this week. We were able to get the right defenses called and close the gaps,” Koontz said.