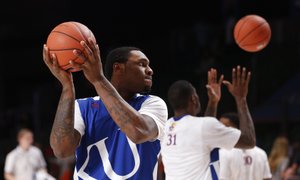 Those calls will be for the No. 23 Iowa Hawkeyes, who spanked UTEP Saturday night to advance to the title game.

It would have been Jayhawks versus Hawkeyes in tonight’s final, but Ryan Arcidiacono changed that with one three-point stroke with 11 seconds left against KU.

Wright drew the play up for Arcidiacono, even though he hadn’t hit a shot all night against Kansas (5-1). Villanova’s coach had seen the 6-foot-3 guard from Langhorne, Pa., hit it too many times in practice.

Wright had no reason to think anything different would happen when Arcidiacono released the three that erased a 59-58 Kansas advantage.

Frank Mason, whose and-one, spinning lay-in gave the Jayhawks their first lead of the second half, 59-58, with 29.2 seconds left, could have been the hero.

“Arch” had other intentions behind the arc.

“I put my eyes on the rim,” said Arcidiacono, who shot 1-for-6 from the floor and only scored four points but happened to provide the most critical three of the game. “I really didn’t see (Ellis flying at him). I thought I was wide-open. I just pulled the trigger.”

Even though Wright hadn’t drawn up any plays for Arcidiacono against Kansas, Jayhawks coach Bill Self wasn’t taken aback to see Villanova’s point guard make the play of the game, despite double-digit scoring nights from the Wildcats’ JayVaughn Pinkston, James Bell, Darrun Hilliard and Dyllan Ennis.

“I don’t know the personality of the guy (Arcidiacono),” Self said, “but he seemed like a tough guy to me. ... It didn’t surprise me that he was the one who took the shot.”

A point guard to the very core, of course Arcidiacono credited his teammates for getting him open and shrugged off the notion he deserved credit for his team’s marquee victory or his clutch play. He said his Wildcats teammates set game-changing screens. Spoken like a guy a team can rally around.

“Honestly, I hadn’t made a shot all night,” the guard said with a smile.

The difference between Villanova, at least on this night in late November, months in advance of when the games mean the most, might have been the experience of ’Nova’s lineup. Wright said as much, as the coach beamed about his guys.

“They’ve been around,” Wright said. “If there’s any difference right now, (the Jayhawks) have got a lot of freshmen. A lot.”

And that might be the best news for Self and his Kansas team. Sure, people will remember the Arcidiacono shot, and it will be all over ESPN and every other outlet college basketball junkies go to for the next few days, weeks, maybe even all season.

But that Villanova highlight won’t end KU’s season. It won’t matter at all in March.

Like most coaches who see Andrew Wiggins, Joel Embiid, Frank Mason and the rest of KU’s loaded roster, Wright shuddered to think what the Jayhawks might look like come NCAA Tournament time.

The Villanova coach admitted he sure wouldn’t want to see them in the same region as Villanova.

“That team was so young,” he repeated. “I think that was a little difference there.”

Well, maybe there was one other factor.

What's up with guys having really long last names driving daggers through the hearts of Jayhawk nation? It was like only yesterday that Farokhmanesh was the most hated surname in Kansas...

Stop acting like the game was decided by one f'ing shot. That was a whole game worth of terrible play. They acted like the beach was more important than the reason they went to the Bahama's.

I wonder how much KU receive $$$ in return. I hope this is the last one we play there.