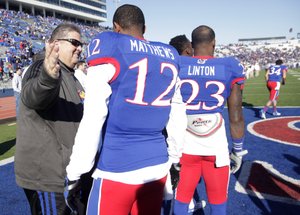 With his head coach scheduled to hit the road for recruiting Sunday and his football team having just wrapped up another disappointing season, Kansas University athletic director Sheahon Zenger offered a vote of confidence for the current coaching staff and the direction it's taking Kansas football.

“I've been through many rebuilding projects,” said Zenger following KU's 31-10 loss to rival Kansas State on Saturday at Memorial Stadium. “And this is when you stay the course. Whether it be today or the rest of the season, wins and losses aren't always indicative of the effort that is put in by this coaching staff and these players. I'm proud of their work ethic and we'll continue to chop away at this.”

Weis, who is now 4-20 during his first two seasons at Kansas, seemed eager to hit the road to recruit help for the future. With offensive line coach Tim Grunhard stepping down Sunday, Weis indicated that one of his top priorities on the recruiting trail would be to visit the already-committed players with whom Grunhard created bonds.

“I'll be in all their homes this week,” said Weis, speaking mostly of offensive linemen.

As for the rest of the whirlwind two weeks, Weis and his coaching staff will hit it hard until Dec. 13, when they'll come back to Lawrence for the team banquet and then head into their offseason conditioning program starting Dec. 15, when the NCAA puts a temporary stop to all recruiting activity.

Asked about his confidence level as he went out in search of reinforcements, Weis seemed ready.

“Pretty good,” he said. “I usually feel pretty good about our plan in recruiting.”

When asked if he had plans to shake up his coaching staff any more than by replacing Grunhard, Weis turned the focus back to recruiting.

“Right now I'm not worrying about doing anything with our staff,” he said. “I want to get through recruiting. If you're gonna do anything, that's the time when you do that. Right now, it's full speed ahead in recruiting.”

KU has nine players committed in the current recruiting class and is expected to add more than a dozen more, mixing in high school and junior college talent at the team's weakest positions.

Saturday's loss marked the final game in the careers of 23 players who either exhausted their eligibility or will graduate and not return to the program next season.

That made the postgame scene in the locker room emotional for everyone and Weis briefly shared what he said to the outgoing players following their final game.

“I had a long conversation with 'em in the locker room and I'd prefer to leave that private,” he began. “I always talk about life. I'm a lot bigger than football. There's a lot of things you learn by being a part of a football team and football happens to be just one of 'em.”

Asked how it felt to be finished, senior safety Dexter Linton summed it up best.

“Sad day in Lawrence, Kansas,” he said. “We've been here for so long, me for five years, three coaches, I'm gonna miss it. We gave it our all, we worked hard and we gave everything we could to the program throughout all the losses. We never gave up.”

Added senior center Gavin Howard of the scene in a quiet locker room following the loss: “It was real emotional, with all the underclassmen telling the seniors they're gonna miss 'em and talking to all of the coaches you've been with for so long.”

The Jayhawks lost Saturday’s opening coin toss for the sixth time this season. K-State chose to defer its choice to the second half and KU elected to receive the first-half kickoff. ... KU set a season-high with 12 tackles for loss. ... Junior wide receiver Justin McCay set career-highs in both receptions (5) and receiving yards (45). ... Isaiah Johnson's third-quarter interception gave him five for the season, the most by a Jayhawk since Darrell Stuckey recorded five in 2008. ... Temperature at kickoff was 47 degrees, under sunny skies with winds of 10 mph out of the southwest.

I actually agree with Zenger. I was pretty down on the turnaround earlier this year, but I didn't feel like we were totally outmanned today and at least the eye test tells me it's getting better.

The last Kansas AD to fire the football coach he hired was Dutch Lonborg in the early '50s (Chuck Mather).

Thanks, Chuck. Your point?

Mizzou is going to the SEC championship...meanwhile...we have an athletic director jacking around with his failed experiment...only to set us back even further.

Sick of this crap.

Anyone that thinks Zenger should bring Weis back has no clue about how a football program becomes successful.

It doesn't take Bill Parcells to point out how undisciplined and under coached this team is.

Bring Bohls back...he was our last decent AD...and it's kind of an important position.

Where's the "thumb down" button?

No, he isnt "kidding"...he is simply desperate. I suppose "Al Bohl" or "Sheahon Zenger" are to blame for all the WRs dropping pass after pass, game after game? If your fancy is to blame AD's, then blame Lew for witchhunting Mangino, blame Lew for hiring incompetent Gill, who is to blame for the culture and atmosphere created which destroyed the program. Weis has tried just about everything he could, but if the Oline cant block, Jake Heaps+Sims sufferred mightily, right? And if the WRs cannot catch, then the whole damn offense stalls out, right? Game after game, right? You saw this, so you already know this...but are busy playing the "blame" game, right?

How about blaming Bill Self for all the players missing their FTs vs. Villanova? Isnt that how it works? Or blame whatever AD hired Bill Self for us losing to KY, UNI, Bucknell, Bradley, UCLA, VCU, Villanova, MichState x 3, Tennessee walk-ons, TCU, etc...

Erich - Perkins no doubt started this with his witch hunt. Mangino was the best thing this program had going for it.

Yes - I do blame the dropped passes on Weis. It's called playing disciplined - intelligent football.

How many times did the O-line pull a false start during a critical 3rd down. How many times did we see similar plays like Cozart running out of bounds 1 yard shy of the sticks...or running into a handful of defenders when he had a path straight into the inzone. What about the miss tackles on defense ? Think I've mentioned this to you before, but go to any game (besides WVU) on DVR, and write down how many mental mistakes we made. This happened week after week after week. These are items that didn't happen under Mangino's watch, because his teams played smart - disciplined football. Weis has NEVER proven that he can develop a team that plays disciplined football. He didn't do it in 5 seasons at Notre Dame...and he hasn't even come close to doing it in 2 seasons at KU.

It's been two years, mate. I'm just as tired of losing as everybody else is, but these things take time. I'm confident that we'll compete for a bowl game next year, but we NEED to get receivers who drop near perfect passes, and we NEED an O-Line that can block.

Yeah, so he can run off another basketball coach...

If he is the next OC, we may need to wait for Rice to complete the Bowl tour.

Powlus, and Ianello needed to go before Grunhard I think. There were games were the line played pretty well. I dont think there was a game where the TE, WR, or QB played well. OF COURSE THE NON NOTRE DAME tag along steps down. Until Weis gets rid of some of the terrible Notre Dame tag alongsI do not know how much success we will see.

You do realize Tim Grunhard is a Notre Dame graduate, right?

I could care less about the NDame thing: Tim Grunhard was a highly-respected multi-year ProBowler at center for the KC Chiefs. That alone gave him the cred to try coaching the position. But, either we lack talent, or Grunhard found out he isnt cut out for college coaching, or maybe just didnt have the patience for teaching the game?--> who knows? I sincerely wished his coaching stint at KU had been successful, since Im a big NFL and Chiefs fan also.

I wish Tim Grunhard all the best.

The problem with most naturally gifted players is that they can't teach natural ability so they have a hard time teaching technique and other tricks of the trade. I know there are exceptions, Grunhard wasn't one of them.

Yes I knew Grunhard was a ND Graduate. Grunhard was the one guy I had respect for and wanted and he had a great Pro Career, like stated before. But other than recruiting I just do not think Powlus or Ianello have done their jobs

What a terrible season. Zenger may have confidence, but this team just couldn't compete. What would surprised anyone to see another last place finish in the Big12 and two or three meaningless wins?

Mr. Zenger may be confident but alums can't be excited about Weis. Maybe there isn't anyone better than Weis. That's scary.

Name a coach better than Weis who is interested in coming to coach at Kansas...

If you've got that inside track, in-the-know of a fantastic, program-building coach who actually desires to lead the Jayhawks and will produce more than 6 wins in his first two seasons combined, I will jump on your New Coach Bandwagon immediately.

Until then, Weis tripled the team's wins from last year to this year and got Kansas their first conference win since The Mangino Witch Trials, so I'm on board with Chuckles until something better comes along.

Not true. Turner Gill's 2010 Jayhawks got that miraculous win over Colorado.

Good point! How could I forget about that one?!

Kansas won 3 games over last season's 1. But last year's team could have easily been 6-6 if a few things had worked out differently for them. This year's team hardly gave me any reason to believe that it could have been better than 3-9. Maybe the game at Rice, but that's about it. This team may have won more games than last season, but was less competitive than last season.

Bryce I agree last years team had tech beat Texas beat ok state beat. Play calling killed us I wonder lookin at this season if there was a reason we were coaching not to lose instead of coaching to win. The qb we had in operating last year barely touched the field this year and his passing percentage was best of all qb's. If good play warranted more playing time this theory was thrown out with the qb position. I really think HCCW was too committed to the qb's he recruited compared to being committed to fielding the most competitive team