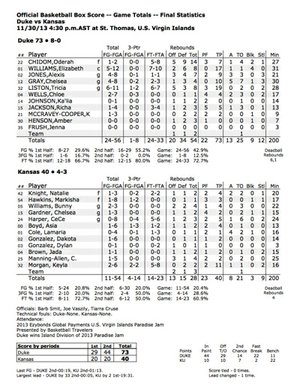 St. Thomas, Virgin Islands — The No. 2-ranked Duke women’s basketball team doubled up Kansas University in the second half and routed the Jayhawks, 73-40, Saturday in the final game of the U.S. Virgin Islands Paradise Jam tournament.

Duke outscored Kansas, 44-20, in the second half after shaky shooting performances by both teams gave the Blue Devils (8-0) a 29-20 halftime lead.

The Jayhawks (4-3) were led by 11 points from freshman guard Keyla Morgan. No other KU player scored more than five points as Kansas shot just 20 percent from the field.

The Jayhawks will host Arkansas at 7 p.m. Wednesday at Allen Fieldhouse.

This season is going to be sooo long!