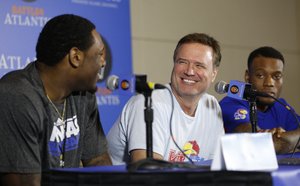 I was wondering the same thing.

I got lucky, get to watch the game on dish tv, it carries the axs.tv channel. if you know th h its on channel 167

AXS is channel 340 on DirecTv

The coach at WK used to run Princeton while at Colorado, slow pace, keeping score in 50-60's. It seems that he has changed the style and now playing at a much faster pace. It will be an interesting game, two teams running and gunning.

You can't run and gun unless you rebound. I have faith in Ellis, Black, Traylor, and Embiid.

Anyone know if you can get AXS TV on Comcast/Xfinity in Olathe? I'm trying to find it, and so far no luck.

No you can't I'm struggling to find a radio

Does anyone know the web address of the newer KU basketball message boards? I really enjoyed watching the game-time comments that seem to have disappeared from this one.