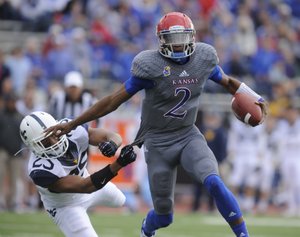 It’s a rarity in college football for true freshmen to start at any position and even more uncommon for it to happen at quarterback.

But Saturday, during a 31-19 skid-snapping, celebration-inducing victory over West Virginia, Kansas University coach Charlie Weis handed the ball to freshman Montell Cozart and let him do what he does best — win.

During his two seasons as a quarterback at Bishop Miege High, Cozart led the Stags to 16 victories, including a berth in the state championship game his senior year. Not bad for a guy who just started playing the position.

As a high school sophomore, the long, lean and athletic Cozart played cornerback, and, as former Miege head coach and current KU offensive line coach Tim Grunhard pointed out, it looked like he was destined to stay there.

“We had a senior captain who was supposed to be the quarterback (Cozart’s junior year 2011),” Grunhard said. “But we said, ‘Hey, let’s take a look at this kid Montell Cozart.’ He had an unbelievable summer, and the very first game he played in was against Blue Valley Northwest, and we had a two-minute situation — 1:35 (left), no timeouts, and he drove us down and scored a touchdown, and I said, ‘There’s our quarterback. That’s a Div. I quarterback.’”

After gaining valuable but limited experience during Kansas’ previous four games, Cozart started in place of junior Jake Heaps against West Virginia and led the Jayhawks to their first Big 12 victory since Nov. 6, 2010.

Throughout the game, Cozart showed he could be calm, confident, fiery and efficient, and although his final numbers — 60 yards rushing on 13 carries, 5-of-12 passing for 61 more — did not hammer home his importance, his teammates did.

“(Having Montell at quarterback) helps out a lot because, obviously, you can’t just key on the running back, you have to worry about him as well,” said senior running back James Sims, who rushed for a career-high 211 yards Saturday. “When he first (got to KU), he was quiet, but you could tell he wanted to play. He got his opportunity, and he made the most of it. He didn’t let the pressure get to him. He just went out and executed like he does in practice, and he got the job done.”

In high school, Cozart torched overmatched opponents with his physical skills, most notably his speed. But the thing Grunhard likes most about the young quarterback’s first season at KU has been his mental development.

“Now the guy who’s across from you, who’s 255 pounds, runs a 4.5 (-second 40-yard dash), and so do you,” Grunhard said. “It’s not like that in high school. He’s had to really learn the game and understand the game more because there’s so much that goes into being a quarterback at this level.”

Weis has said throughout the season that bringing Cozart along slowly would not have gone as well if not for Heaps’ character and team-first mentality. That was on full display Saturday, and Cozart said it helped.

“Every time I come off, he’s right in my ear, him and coach (Ron) Powlus,” Cozart said of Heaps. “Me and Jake have a great relationship. Just steady learning. Every time I go out there and ask him a question, he’s always willing to tell me the answer and help me out.”

There’s a lot of learning and growing ahead of Cozart at Kansas, but the 6-foot-2, 189-pound rookie with the infectious smile and versatile skill set already has shown he may be capable of handling it all.

“The one thing about Montell is, he’s a competitor,” Grunhard said. “As this progresses over the next four years, you’re gonna see a guy who knows how to make plays. He’s gonna make a lot of people happy here in Jayhawk land before it’s all said and done.”

Its a great start. Let build on it. Get him some protection and blocking, and add playmakers who will catch the ball, and then we can see how far Cozart will take us.

I only wish now that Weis had used Cozart earlier in the season when we still had the chance to go to a bowl.

Don't get too worked up: KU still has linemen who can't block and receivers who can't get open or catch. The best the Hawks could hope for is self-respect and something to look forward to next season.

Man, I have a lot of respect for Heaps. The way he's handled things is a model for others to follow.

Heaps is a class act just like Dayne was. I hope he has the same success.

Heaps is a great teammate, helping Cozart along. It will be interesting to see how Charlie wants to recruit the QB position in the future given his love for 6'3+ pro-style quarterbacks. Looking back, KU's best quarterbacks have had the ability to scramble (Reesing, Whitmore). Either way, I think given our current talent level in the trenches and on the outside, Cozart is the guy. Nick Harwell should help next year, then again you never know, Justin Mccay has been a let down. The win alone bought Charlie at least another year. Progress is progress no matter how slow.

How about Sims? Guy had 211 yards, a career high. He is a beast when he gets rolling. I thought it was a bad move to take him out and put Pierson in. Pierson took a big hit and it looks like he might be out again. I feel bad for the guy, tough luck this year. Was Sims hurt or did they just want him to rest up?

The defense was starting to pile the box so since Miller was not playing they put Pierson in to try and run side to side. Cozart seems like he will have the upper hand. We still have (RS Darling and Millweard) and Heaps coming back next year. There will be major competition at the QB. Depends on how we recruit receivers, and OL I think depends on who wins the competition.

I like Heaps. Good kid, he is. He finds himself in a sport where the best players must play, and he's handled it with 13 kinds of class.