Opinion: Catching up: Jamari Traylor growing into his role 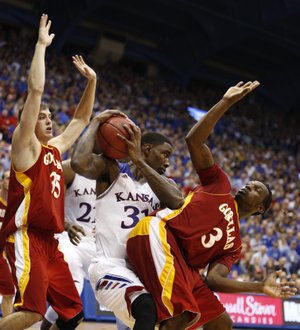 Kansas center Jamari Traylor pulls a rebound away from Pittsburg State defenders Cody Gafford (35) and Jerrod Gaston (3) during the second half of an exhibition game on Tuesday, Oct. 29, 2013 at Allen Fieldhouse.

Jamari Traylor joined Kansas University’s perennial-powerhouse basketball program and in many ways it was as if practices were in English and he spoke a foreign language. He possessed the raw athletic ability, but didn’t have the background to apply those skills with as much purpose as the basketball lifers who surrounded him daily.

“When I first started playing as a junior in high school,” Traylor said after a recent practice, “I thought a lot of different things were being thrown at me. Then I got here, and I basically realized I didn’t really know much at all. Everything I did know wasn’t even a fraction of what I had to know.”

Per restrictions put in place by the NCAA Clearinghouse, he and Ben McLemore weren’t allowed to participate in basketball activities the first semester of the 2011-2012 season, and their status as second-semester practice-only players was dependent on them showing significant progress academically, which they did.

By then, Traylor’s basketball education had fallen farther behind.

Last season, as a red-shirt freshman, Traylor looked like an exceptional athlete trying to become a basketball player. He averaged 9 minutes, 37 seconds of playing time, 2.1 points and 2.1 rebounds. Now he looks more under control, more relaxed, no longer overwhelmed by sharing a gymnasium floor with men who had been playing the game their whole lives.

“I’m definitely getting hold of it,” he said. “As far as playing against guys who have been playing all their lives, I guess that kind of motivates me because I’ve only been playing for X amount of years, and I’m already at the University of Kansas, so I’ve got a lot more potential in me. I’m trying to reach my ceiling.”

It’s a high one, especially for a role player.

Every basketball team, especially those loaded with talent at every spot, needs complementary pieces. Most don’t bring explosive leaping ability, a sculpted 6-foot-8, 220-pound body, a knack for blocking shots and a quickness that enables him to burst into passing lanes as quickly as a guard. His shooting range is limited, his touch developing. He continues to work on that but knows his minutes will come before his shot will as long as he plays his role in practice and in games.

Part of his job, Traylor indicated, is to introduce the freshmen to the rough realities of the way college basketball is played in the paint by “making them a little tougher, like the guys before me did to me. I try my best to bang around with these guys. I used to be like a pinball in practice with Thomas (Robinson) and Jeff (Withey) taking turns on me. I guess it’s my turn to help other guys out by making them tougher.”

Traylor defined his role as “definitely bringing energy to the team, be a tremendous rebounder, finish at the basket, be a great defender.”

As a red-shirt, he was recipient of painful lessons. Now he dispenses them. Naturally, he enjoys the latter more. And he now knows enough about the game to know that it pays to keep things as simple as possible, which he showed when asked what made Robinson such a monster on the boards.

It starts with reading the shooter.

“See if it’s going to go short or go long, but it all comes down to how bad you want it,” he said.

How badly does Traylor want it?

“I want this team to do great things, so I definitely want it,” he said. “It’s a little early to be talking about everything, but I know I want to win the Big 12 championship again, and I want to continue and win the whole thing. I think if we continue to work hard, we can do some big things.”

Traylor is the Darnell Jackson / Sasha Kahn type of post man that plays blue collar basketball. His depth in the post will be HUGE come April.

Very Nice Job, Tom. This article was a breath of fresh air.

Traylor did look good in the Pitt game, I liked his energy level. He also seemed to be in the right place at the right time on several occasions, more so than I remember him being in the past.

Can't wait for tonight's game, although I'll be watching this one from the couch.

Speaking of energy, I really liked what I saw from Embiid. He has a long way to go, but seeing him dive on the ground twice in one sequence is always a good sign. I would like to point out the positive impact Collins is still having on this team. In 08 when the team was his, he was the leader of a scrappy bunch that just wanted to win(they did have a bad early exit vs that purple school which shall not be named). That passion impacted the Morris twins, T rob and Taylor, Ej, Withey and Releford and now Traylor. We have a bunch of guys who want to win bad and that will help us a lot. Hopefully we never lose that leader who just wants to beat the crap out of his teammates in practice.

Yes, Embiid is rough. Kind of like Aldrich or Withey when they got here. I liked seeing Embiid's hustle as well, but a good play here or there is not satisfactory. Self will coach him up to the point where he's showing more consistency. Kansas is great at producing quality big men.

I think it's the best big-man laboratory in the nation because of the depth and variety of styles every year. Your always guarded by athletic guys like Sasha Kaun, Darrell Arthur, Jeff Withey, etc., and the athletes come in different sizes and shapes. And you learn how to guard guys who score in different ways. A lot of programs, even top 25 ones, might have two good post players, but Kansas always has a minimum of four or five. ... I'll never forget my first day of first grade. The teacher told us we were going to what I thought was "the laboratory." I was really excited, thinking we were going to be working with smoking test tubes. I was really disappointed to learn a "lavatory" was different from a laboratory.

They are at times not that different. I have left stool, urine and semen samples at both places.

Don't expect this post to last that long and I apologize in advance with no disrespect intended.

Embiid is nothing like Withey or Aldrich although it could appear that way. Embiid has far less experience but his athleticism is far superior than the other two. Embiid is closer to Hakeem Olajuwon who was also inexperienced when he arrived at Houston and will have far greater success at the next level then either Withey or Aldrich.

While he would still be an early first round draft pick if he left after one year, I think it would be in his long-term interest to play a minimum of two years and maybe three at Kansas. I don't know his family's situation which often determines when a player decides to leave.

Look for a "remarkably focused" defensive intensity vs. La-Monroe on Friday night...