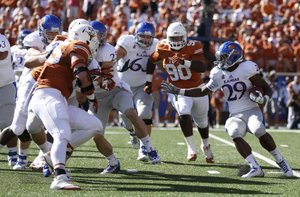 Images from Saturday's game between the Jayhawks and Longhorns in Austin, Texas.

Undefeated in the Big 12, the Texas Longhorns are running hard from the rap that they’re a team stocked full of big, fast, talented five-star recruits.

Nobody ran harder from it than Malcolm Brown, who carried the ball 20 times for 119 yards and a career-high four touchdowns in UT’s 35-13 victory Saturday against Kansas University.

The nation’s top-ranked running-back recruit out of Cibolo, Texas, Brown, a 6-foot, 220-pound junior, has been hampered by injuries the past couple of seasons, after rushing for 742 yards as a freshman.

“We want to run tough every week,” Brown said. “And I think that the offensive line did a great job and made it a whole lot easier on me. I know we just want to ground those yards out, and that is what we came out and did.”

As is the case with any physical running back, Brown said he looks to initiate contact.

“That is the type of runner I want to be, and these coaches want guys who are tough,” Brown said. “That is something I have taken pride in this past year, so I guess I was seeking it a little bit.”

Brown ranks second to Johnathan Gray in carries for the Longhorns, 151-83. Texas coach Mack Brown sounded as if he could see a big game coming from Malcolm Brown.

“He’s well,” the coach said. “More than anything else, he hasn’t been well for a while. And he tweaked his ankle again early in the year. He’s just so powerful that he’s a great short-yardage and goal-line back, obviously, but he also is very powerful in the fourth quarter.”

Co-offensive coordinator Major Applewhite used the word that has become a theme for the Longhorns (6-2 overall, 5-0 in the Big 12).