From left, Vanderbilt's Shan Foster, Dan Cage, Alex Gordon, Ted Skuchas and assistant coach Brad Frederick cheer from the bench in the closing moments of their game against George Washington University during the first round of the NCAA East Regional basketball tournament at Arco Arena in Sacramento, Calif., Thursday, March 15, 2007. Vanderbilt won the game, 77-44.

Former Lawrence High basketball player Brad Frederick, who has been an assistant coach the past 14 years at Vanderbilt, will be joining Roy Williams’ North Carolina staff, the website Inside Carolina reported Thursday night.

A UNC official could not confirm Frederick’s hiring when reached by Inside Carolina on Thursday night.

UNC has been advertising for a director of operations/director of player personnel for men’s basketball. It is unclear whether Joe Holladay, the current director of basketball operations, is remaining on Williams’ staff.

Frederick, the son of former KU athletic director Bob and Margey Frederick of Lawrence, played on the Lions’ 1995 state championship team before walking on at North Carolina, where he played for both Dean Smith and Bill Guthridge.

Frederick had been a candidate for an opening on former KU coach Williams’ UNC staff last year, the position ultimately filled by Hubert Davis.

KU officially has one official opening, most likely two, on Bill Self’s staff. Self has not yet announced a replacement for assistant coach Joe Dooley, who recently accepted the head-coaching post at Florida Gulf Coast. Self has said director of basketball operations Doc Sadler likely would not be back, instead seeking a return to actual on-court coaching as a head coach or full-time assistant. Former Nebraska head coach Sadler has been listed as the leading candidate to join Fred Hoiberg’s Iowa State staff as a full-time assistant.

The two operated SugarTime sports agency from Dec. 2012 until April 2013, CBS reports. According to the CBS report, Sugarman alleges Chalmers “did not pay his half of agency expenses and was caught on video surveillance stealing documents and files containing propriety information from the agency’s Miami offices the night before he resigned from the firm.”

Since resigning, Sugarman said he violated a no-compete clause by continuing to recruit potential clients including KU’s Ben McLemore, Travis Releford and Elijah Johnson. Chalmers’ son, Mario, of the Miami Heat is not involved in the lawsuit.

Ha! I just happen to be on here looking at this.
Im sure you will sleep better tonight Jaybate...

Great article on Perry Ellis at ESPN. Thought everyone would want to read it.

Really good article, jkilgore! Thanks for sharing the link. I really liked the quotes from all parties: Ellis, Black and Self. We may be on the verge of a very special basketball season.

Thanks for that link jkilgore. Well worth reading. I hope this year's class will be ready to go from Day 1 and not get the short leash most freshmen get.

We don't have the luxury of allowing them to mature while warming the bench.

Sooner or later they all pass through Lawrence.

Travis Releford...lock'em down and you'll be NBA bound.

I think that's in reference to the quality of news in this article. A UNC hire, Scandal, rehashing speculation on vacancies with no new information and a very minor article (not even how well he did) on Releford. It interests the diehards and longtime fans of this site, but I'll forget most of it in an hour or so. Just filler on the long march to the next school year.

I am a fan of melons, as well.

I was curious how long it would take for someone to advance HEM’s post from the sublime to the blatant - - nicely done! :^)

My sentiments exactly! Here are a few interesting article / interview to wet your appetite!

Kansas, Duke, Kentucky, and MIchigan State in the Champions Classic. KU is the only team in the tournament without a win. We need to win the game this year, especially against Duke.

I hear ya. The Champions Classic this year should be an instant CLASSIC. You have four of the top six teams in the country playing. Kentucky #1, Michigan St. #2, KU #5 and Duke #6. WOW. That is according to an ESPN pre season ranking. I have already called on tickets for this one. It's in Chicago. Easy afternoon flight on Tuesday the 12th of November and back home on the 13th. Not even sure to get a hotel room. Might spend Tuesday night celebrating on Rush Street till 4:00 AM get a cab and head to the airport. To old to do that anymore. LOL. Should be fun. Tickets are not out on this game. Anxious to see how greedy the ticket brokers are going to get on these games.

Sounds like you are in for a great evening of fun. 4 in the morning? Had to laugh, I'm too old for that as well. I do remember those days, however. Thanks!

On one trip to Chicago we were kicked out of the bars on Rush Street about 4 a.m. and asked our cabbie (who spoke very little English) to take us somewhere where the bars would still be open. We ended up in Greek Town, partied until dawn, found a diner for breakfast and then waited another hour (at least it seemed like an hour) for a cab at 7:30 a.m. on a Sunday. Ahhh, great times indeed.

I'm going too. Tickets go on sale this summer on Ticketmaster.

At the end of the year it doesn't make any difference whether or not we won a game in November. As much of a fan I am of college basketball, I really don't start to get immersed until mid December.

You have your right to your opinion, and I understand where you are coming from. However, I don't care if we are playing Duke in the parking lot of the Topeka YMCA, I want to beat them, and it matters to me!

Not a whole lot, but I'm sure it still gets louder than Cameron...

Classic, too funny! Thanks, I got a kick out of that one!

IM GONNA BE THERE!!!!! I'm a little excited if you couldn't tell.

I wonder, why can't we get any "reporting" on who is under consideration for the asst. coach job? Not one piece of information since Dooley left.

It has been oddly quiet and seems to be taking longer than I would have expected. Wondering if several prospects fell through/declined, or if Self has someone in mind that he's waiting on? Seems unlikely he'd be hiring someone currently involved with the NBA playoffs...

Billy Clyde would make a great assistant and teacher. No stress to drink as an assistant. Bring back Dennis Hopper and run the Picket Fence. I thought Collison would retire and we would have the perfect big man coach. He played too well in the playoffs. He's got to take the $.

By the way, Vegas likes our chances.

Haven't had the pleasure of meeting Brad, but being that he is the son of Bob, I wish him the very best. Bob was a good man, may he rest in peace.

Any word on how Travis did in the scrimmage?

All I found was that an article said he was an "honorable mention" among guys that stood out at the recent workout. Most top guys weren't there, though.

Crap I need to pop on the insider account. Yeah, most of the guys that are a lock to be drafted won't do something like this. It's too risky. A bird in hand is worth two in the bush kind of thing. Honorable mention isn't bad. Man, I just think that late in the second round, his size and defense is gonna look awfully good to a GM who is simply wanting to build a stronger team.

I found this on Twitter one time. Great picture. 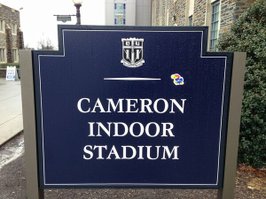 I think Uncle Roy did it and laughed all the way back to Chapel Hill!!!

Back to the movies, 50's & 60's sci-fi." Krono's ", "Forbidden Planet", "Invader's From Mars", "Invasion of the Body Snatchers", from the 30's Claude Raines in "The Invisible Man" don't forget one of the first "footers" playing center from a small town in Europe the man with the bolts in his neck "FRANKENSTEIN". He wouldn't be able to play both ends of the floor. Think he'd be Nike or Adidas? Lil help? RCJH oh yes the 60's, 'The Andromeda Strain", "2001", "Fantastic Voyage". Come on down......."Day of the Triffads" sp? "Children of the Damned"

Conner F will work with Tarik on his foul shooting, mark my imagination! Little manic today, Please everyone have a safe and wonderful weekend, monk.

So what about Doc Sadler replacing Dooley? I really like Doc. this would help KU out and put Doc back on the coaching line.... Dooley is a great recruiter. I know that was a bit of a challenge for Doc, but who knows? Thoughts?

It sounds like Bill Self doesn't share your opinion on Sadler. I can't find the quotes but IIRC Self said something about needing to see more from Sadler to have him be considered. So basically Bill has considered him, and is still looking elsewhere. Which I am sure is why Sadler is also looking to go elsewhere.

swigrimm: You answered your own question .. we need a stud recruiter to replace Dooley. Sadler ain't that.

After listening to Townsend, Dooley and Roberts on the radio, although they are very different, each one speaks the language of Bill Self to each recruit. They are recruiters who will answer questions honestly. KU has an edge like the other 4 big schools in getting in the door of a top recruit. If a kid hears the truth, he'll either be a Jayhawk or whatever. If he chooses KU, then he was not lied to in recruiting. There will be painful request for red shirts, but no one who is on the team from last year that played minutes should sit back and watch the newer, unexpected recruits to automatically take their spot. Landen should probably start and I expect him to be like Kevin Young and be difficult to pry out of the starting spot.

No melons in two seasons ' Noo38s 44s or nice littler round eyes either. Does. More. Water. Equal. More sweetness. Or milk? Now that's. Something. To ponder.

One more signing would propel us through this summer's off season posting trough.

Now that Brad Frederick has mercifully signed to a school he can be 100% loyal to, let's TAP an assistant from Shanghai, China. Recruiting is a numbers game. China has 1.334 billion pie holes.

Ronnie caught stealing? Such a christian man doing these things is troubling.

Ronnie's usefulness to Mario Chalmers ran out a long time ago. Now's just a leech. Glad he left KU when he did and nothing unsavory came out of his time with us (as far as we know).