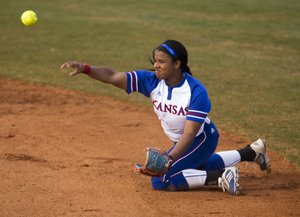 Kansas junior second baseman Ashley Newman makes a throw to first from her knees after making a diving play on the ball during Kansas' softball game against Texas, Thursday, March 28, 2013 at Arrocha Ballpark.

Alicia Pille (7-4) limited Texas to two unearned runs through five innings, but the Longhorns scored twice in the sixth and once in the seventh.

“Overall, Pille had a pretty good start,” KU coach Megan Smith said. “We intentionally walked some people for strategy reasons — and it worked. She just had too many walks to people we shouldn’t have walked, but overall I think she had a strong performance. She handled their best hitters. There were a few slip-ups from her but overall pretty good.”

“We needed key hits and we didn’t get them,” Smith said. “One swing here or there, it could’ve been a close game early. We just didn’t get those clutch hits. We had a good game plan, didn’t necessarily execute it well and we’re hoping to do that tomorrow. (Luna) was tough today, hats off to her.”