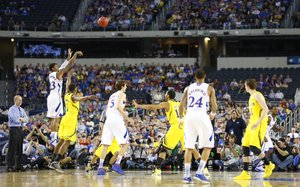 Images from Friday night's game against Michigan at Cowboys Stadium in Arlington, Texas.

KU coach Bill Self talks after loss to Michigan

See, it was Jordan, who said the final few words to Michigan point guard Trey Burke in the locker room at halftime, words that inspired a 23-point explosion from the sophomore whom the Jayhawks held scoreless during the first 20 minutes.

“I think (Kansas) did a really good job of keeping me out of the paint (in the first half),” Burke said. “We knew that they were really good defensively, but my job was just to knock down open shots and get everyone else involved. I understand that this team is best when we're all flowing offensively. Coach Jordan just told me to be a little bit more aggressive.”

Aggressive did not begin to explain it. Burke caught fire down the stretch, helping the Wolverines (29-7) pull even in the final seconds after trailing by 14 inside of seven minutes and by as many as 10 at the 2:52 mark of the second half.

Burke's heroics may not have mattered had KU (31-6) sealed the deal at the free-throw line, but a late miss by Elijah Johnson left the door cracked, and Burke kicked the Maize and Blue through it.

“When Elijah Johnson missed the front end of the one-and-one, I knew we still had a chance,” Burke said. “Coach called a play for me, but it was really to try to get into the paint and get a quick layup. Then I (saw) that they were gonna switch, and I knew we really didn't have a lot of time to get a two and foul and go through all that. And I just hit the shot, really. I stepped back, got some separation and hit the shot. We were all very happy, but there were four seconds left and I just tried to calm everybody down and let 'em know that this game wasn't over.”

Burke's game-tying, 27-foot three-pointer with four seconds to play figures to live in Michigan basketball lore for decades. And he was happy to talk more about it after Friday's victory.

“We fought so hard to come back, it really didn't matter how far the shot was,” he said. “It was either all or nothing. The season flashed before our eyes those last two or three minutes. I had a lot of faith in that shot and it went in.”

Michigan freshman Mitch McGary, who led all scorers with 25 points, played a big part in freeing Burke for the long-range bomb. An overjoyed McGary shared his unique view of the shot with the media after the win.

“I was actually setting a screen,” McGary began. “I was on my back and I turn around and run to try to get an offensive rebound when the shot went in.”

Michigan coach John Beilein said Friday's victory was like many that came before it this season.

“I think everybody that watched this game tonight saw what we've been coaching all year,” he said. “It's a bunch of young men that have high character, they play to win, they play together and they've been persistent all year long. ... I'm proud of them because they deserve this. I feel bad for Kansas. They really have a good team. But the ball bounced our way down the last few minutes, and we keep on playing.”

All this hate on EJ and we're overlooking the fact that dude hit a shot from beyond the coaches box to tie it. Just wasn't in the cards for us this year!

For real. What are you gonna do when the guy hits one from almost 30 feet away?

If it wasn't for EJ's turnovers and bad shot selection a few minutes earlier, he wouldn't have needed a 3 to tie.

Coach rode him down in flames. He refused to bench or substitute for Elijah this year as he did many of his other players. IMO, both Coach and EJ flamed out in this game. This was one of the worst endings for a senior guard and a veteran coach that I can remember.

It PAINS me to say this but I couldn't agree more with you.

This is the most stunning end of game playing in Kansas BB history. Mindboggling stupid plays by EJ but we should have known he is good at those! Not only that but my goodness gracious why the HELL did Self have him there and not Tharpe? What gives?

I've lost some respect for Self and his game management. All I can think of his EJ has something on Self and they are in it together. Now, EJ can enjoy his smokes and other life.

Was that the Topeka YMCA that beat us last night ??