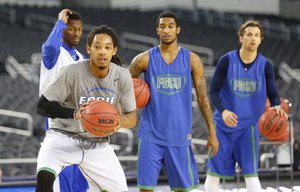 Florida Gulf Coast player Sherwood Brown makes a move to the bucket during a day of practices and press conference for teams in the South Regional at Cowboys Stadium in Arlington, Texas on Thursday, March 28, 2013.

Arlington, Texas — The new America’s Team will play a game inside Cowboys Stadium tonight, and there won’t be any footballs in the air.

In a week’s time, Florida Gulf Coast University has gone from a long name on a short NCAA men’s basketball tournament bracket sheet that only was read and seldom written onto the next line to the most popular basketball team in the nation. After the Eagles’ upset victories against No. 2 seed Georgetown and No. 7 San Diego State, America’s curiosity has been piqued about the school whose toppling of the Hoyas prompted the Foxsports.com headline: “OMFG-CU!”

Now many know that the school is located in Fort Myers, Fla., dorms overlook the beach, the school opened its doors for classes in August, 1997, and didn’t have a basketball program until the 2002-03 school year.

By now, many even know a bit about coach Andy Enfield’s life story. He played basketball for Johns Hopkins University in Cleveland, where he set the NCAA career free-throw percentage mark (.925), received an MBA from Maryland, started a software company and sold it for millions. His wife, Amanda Marucm Enfield, a former supermodel and now a stay-at-home mom, graced the cover of Maxim magazine’s swimsuit edition and was a Victoria’s Secret lingerie model. And he’s the hottest coach in America, having taken his dunk-happy Eagles into a game tonight against Florida, the No. 3 seed in the South Regional.

But is he happy?

“Well, if he’s not, I don’t know what would make him happy,” said junior Chase Fieler, whose alley-oop dunk has gone viral. “He’s pretty successful and living the life a lot of people would like to live. So I think he’s extremely happy.”

Enfield certainly is happy with the development of Fieler and senior Sherwood Brown, who are joined in the starting lineup by three sophomores.

“They are two of the most improved players I’ve seen in 15-plus years of coaching,” Enfield said of the upperclassmen.

Enfield worked under Rick Pitino with the Boston Celtics (1998-2000) and then worked with more than 100 NBA players after starting a company called All Net Basketball, which focused on shooting and other offensive skills instruction. He worked as an assistant coach at Florida State for five years and is in his second year at Florida Gulf Coast, which plays in the Sun Belt Conference.

“I don’t know what other coaches do or staffs, but my background has been in shooting, changing shooting techniques, working on offensive moves, footwork, triple threat, post moves, etc.,” Enfield said. “We spend a lot of time every day in practice. We adjust our shooting techniques, ball-handling, decision-making, their passing, their footwork in the post, their off‑the‑dribble moves, different finishing, the Euro‑step, the floaters.”

Enfield is not one who believes bad shooters can’t be taught to become good ones.

“It’s really amazing when you can give a player certain things to work on, show them film of what they’re doing well and not well and then see them a year or even six months later go out and do that against the best players in the country at a high level,” Enfield said. “And that’s what has taken us from a very streaky, mid‑major college basketball team to a very good mid‑major basketball team, to be able to compete with anyone on our schedule.

“Players don’t come into college with all the skills necessary. And if you don’t have a development program for them, they only get to a certain level.”

Enfield’s Eagles have progressed to a level of the NCAA Tournament nobody could have predicted.

i missed the news that Johns Hopkins had moved to Cleveland. And that Coach Andy Enfield played for Hopkins there. The last time I looked Hopkins was in Baltimore and is generally recognized at the best medical school in the USA(and probably the world.)

he didn't start a software company. he was an employee who had a small stake and cashed out.

What he does have that is true here by all accounts is a gorgeous wife and is the head coach of the most talked about school in college basketball right now. Have you all seen pics of his wife?

FGCU is in the Atlantic Sun Conference not the Sun Belt. The "beach" is on Lake Como which is part of Miromar Lakes, a very nice gated community on the north shore. The university is on the south shore. Nice beach and good swimming. Very few gators.

There is only one America's team. It wears red, white and blue, and its the father of all college basketball teams. FGCU is the hype machine's team. Big Eyeball State where every sports journo wants to spend his last ten years typing.

I like Andy E's offensive think. Self has probably already emulated it. Self gave Snaer to Leonard Hamilton back when Enfield had been at FSU, perhaps in exchange for the low down on Enfield's offensive training techniques. Added to superior defense, it may be what has taken the offense of Tyshawn, TRob, and Travis to the next levels. These three have shown nonlinear development of the kind Enfield implies is possible.

Landen maybe getting a huge dose of this.

How sad that someone on the JW staff is moron enough to buy into this America team crap. Let the sheeple follow along.

I stopped reading at Johns Hopkins in Cleveland. Makes you doubt anything else written here.

Anybody else think Golf course university is Conan U?

I predict their name will be Florida GULP Coast after they choke against Florida tonight!!

Too bad they haven't been exposed to this Media onslaught before, and it's sure to wreck their concentration and focus.

Really Embarrassing. The Sports Editor doesn't check his facts. Maybe a remedial course for Tom is available at the nearby J-School.

there is a cleveland campus -- of alumni at least.. not sure about school there..

Facts schmacts. They're just details that get in the way of an interesting story.

Florida Gulf Coast will get destroyed by Florida.

I love how people give Keegan a break on stuff like this. Facts schmacts? Sorry, reporting incorrect facts is the sign of a poor journalist.

Amanda Marcum not Amanda Marucm... add it to the list

Apparently my sarcasm did not come through clearly. I by no means give him a pass on being lazy with regards to the facts.