Kansas guard Markisha Hawkins, left, blocks the way to the basket against Colorado guard Chucky Jeffery in the first half of a first-round women's NCAA college basketball game on Saturday, March 23, 2013, in Boulder, Colo. KU won the game, 67-52. 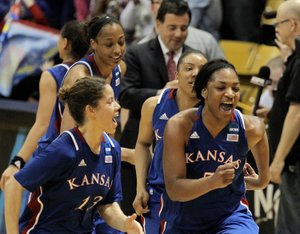 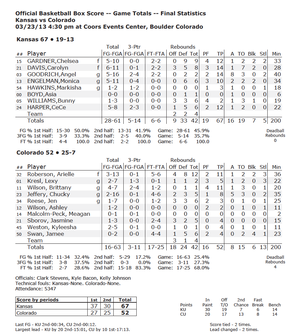 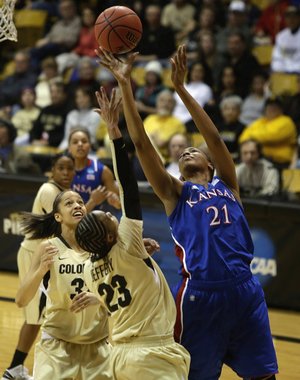 Davis, who sat out for KU’s 2012 NCAA Tournament run after dislocating her knee and tearing an anterior crucial ligament midway through the season, tied Angel Goodrich with a team-high 14 points and grabbed eight boards.

“To get this first win, there’s a lot of joy,” she said. “To be able to be out there and play and contribute to my team, it just feels great.”

“I thought it was just kind of ironic, honestly,” Jayhawks coach Bonnie Henrickson said. “It was a bit ironic that we had Nebraska last year and then Colorado this year.”

Some questioned KU playing in the tournament at all after the Jayhawks finished the season with an 8-10 conference record. Last year, KU bowed out of the tournament after losing to Tennessee in the Sweet 16 and returned four starters from that team.

“Well, there were doubters last year, too, and we came out and we just wanted to show what we could do,” Goodrich said. “If there are doubters now, and I’m sure there are, we don’t really look into that. We just want to go out there and play and have fun and play for each other and just show what we can do as a team, and I feel like we did that tonight.”

In its 13th NCAA Tournament appearance, Kansas grabbed 33 defensive rebounds to Colorado’s 24, and the Jayhawks dominated in the paint, outscoring the Buffs, 30-20.

After averaging 39.9 percent during the regular season, CU shot a dismal 25.4 percent, while KU made 45.9 percent of its field goals and was perfect from the free-throw line, going 6-for-6.

Winning by 15 points, Kansas tied its largest margin of victory in the NCAAs, something the team hadn’t done since 1996 against Middle Tennessee State.

Kansas scored first with a layup from Davis, but Colorado answered and led by as many as 10 (14-4) in the first half. The Jayhawks regained the lead after an 11-1 run capped by a three-pointer from junior guard Markisha Hawkins (24-21) at 6:06 and held on until halftime, 37-27.

Davis picked up her third personal foul with 16:32 to play and didn’t return until 7:39 remained.

Though she played just 28 minutes, Davis’ team noticed her impact on this year’s postseason play.

“We played differently without her last year,” Henrickson said. “It was just good to get her back in to where she could play. (I) can’t say enough for her own perseverance and toughness and her want to prove everybody, prove the (doctor) that she could come back and play. Somewhere later in life, that’s going to help her.”

Five Kansas players scored in the double digits, including guard CeCe Harper, who added 12 from the bench. Goodrich added a game-high eight assists and was the only player from both teams to play the full 40 minutes.

In front of a crowd of 5,347, mostly Buffs fans, the Jayhawks quietly marched away with the game. With less than a minute to play, the Jayhawks spirit squad and traveling fans began singing the Rock Chalk Chant.

Hearing that chant made Davis smile.

“We lost a lot of games down the stretch, and we’re happy to still have our loyal fans with us,” Davis said. “They still believe in us, and we know we have a great team.”

South Carolina, Kansas’ second-round opponent, won in Boulder less than an hour before the Jayhawks took the floor. Davis said the team scouted the Gamecocks “a little bit” in their first-round game against South Dakota State.

“We compared them to West Virginia in our league by how tough they are,” she said. “They’re not as big as West Virginia, but they’re athletic, strong and quick, and it’s going to be tough to beat them.”

Way to rock chalk! The team played with speed and strength! Well done.

Wow! 3 NCAA tourney victories in the past two years for Bonnie. Job savers to say the least. Well done!

Great work, ladies. Monica Engelman, I love your persistence and enthusiasm. Good luck to you and your teammates on Monday. We'd love to see you back at the Sweet 16. Btw: I hope none of this will be a job saver.

A new contract or no contract? Total body of work or a few games in the tourney. I bet it will come down to how far they go.

Congratulations! Keep hoopin' it up.

May He give you all the power to crush the next enemies! This fight ain't over yet - still far far from what you all have been dreaming about. Let's go, lady JHawks!!!!!!!

Congratulations on the impressive win, ladies. It's too bad you have to waste your time on regular season games (just kidding).

The Colorado Athletic Department must be pulling their collective hair out. Watching the game yesterday on tv, all you could hear in the background were cheering Kansas fans and cheerleaders, including the "Rock Chalk Jayhawk" at the end. They can't get rid of KU fans even when they change conferences.

The band needs to do the Rock Chalk Chant better. It sounded grossly out of tune.

Now that's how to dispatch a first-round foe.

back to back years, we beat a team that just left the league....Nebraska last year, and Colorado this year. simply hilarious.

i don't know what it is, but this coach gets the absolute best of her team in the NCAAs. why we can't do this to produce a winning Big 12 season is beyond me frankly. and this is two years in a row coming in short handed....(Knight this year, and Davis last year, both out with knees).

At this point, it's almost like we expect to beat South Carolina....and why shouldn't we? we'll probably have a crowd advantage....USC is far, far away from home, and out of their element......let's go Jayhawks!

Colorado is playing at Coors and the attendance is c. 5000 ? I know we complain about KU attendance, but we filled AF last year. CU deserved to lose.