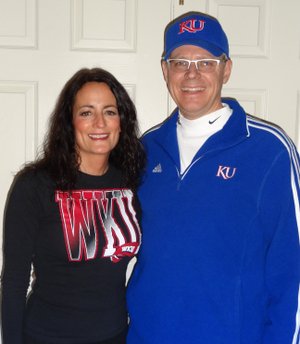 Candy Egan was cooking dinner in the kitchen of her suburban Chicago home Sunday evening when the cries rang out.

“Unbelievable!” was all she could make out from the living room, where her husband of 27 years, Jim, was sitting on the couch, watching the selection show for the NCAA Men’s Basketball Tournament.

It was only a few minutes before the taunts and jokes were flying on Facebook among their friends. That’s because Candy and Jim Egan are something that, as far as they know, is pretty rare: a Western Kentucky University graduate married to a Kansas University graduate.

It’s not exactly easy to find one of those “a house divided” flags with KU and WKU logos to fly over the Egans’ front door. But for a few days this week, that combination has taken on new importance as the Jayhawks and the Hilltoppers prepare to play in the first round of the NCAA Tournament on Friday in Kansas City, Mo.

For now, things aren’t too tense between the two Egans, they say.

A basketball game may be the only thing that could cause such alma mater friction between spouses from two schools that usually have little to do with each other. But basketball’s also a big reason their combination of allegiances happened in the first place.

Candy and her brothers grew up in Chicago, but her oldest brother picked Western Kentucky for college because he wanted a school with a good basketball team. Her other brother was a cheerleader for the Hilltoppers when they made the Final Four in 1971 and defeated KU in the third-place game.

She followed in their place, spending her college years in Bowling Green, Ky. As Candy notes with a laugh, the town’s other claims to fame are as the home of the National Corvette Museum and the headquarters of an underwear manufacturer, Fruit of the Loom.

Jim, meanwhile, grew up in Minnesota but graduated from Shawnee Mission South High School after his family moved when he was a teenager.

Both graduated from their respective schools in the early 1980s, then met shortly afterward while working together at an international transportation company in downtown Chicago.

KU outranks WKU in enrollment (about 28,000 to 21,000) and basketball history (14 Final Fours to one). But Candy and Jim do have some things in common when it comes to their schools. Both campuses, they say, are beautiful, and each sits at least partly atop a hill. They both cheered when the University of Kentucky missed the NCAA Tournament. And neither understands the other’s mascot.

Jim can’t seem to get Candy to understand what the mythical Jayhawk is, exactly.

But that doesn’t compare to Western Kentucky’s mascot, Big Red, Jim says. And that’s even after a strange sequence of events led Big Red to jump on the hood of the Egans’ car, complete with a KU-themed license plate frame, during Western Kentucky’s homecoming parade a few years back.

Candy tries to explain that the red, furry creature is an homage to the red towel legendary basketball coach E.A. Diddle used to swing around during games (designed by a classmate of hers, in fact). Jim counters that it looks like an amorphous red blob with big eyes.

“I don’t know how that ball of red fur was ever conceived as a towel, but that’s what the fine Western Kentucky alumni believe,” Jim said.

Neither Egan is shy about his or her alma mater. They’ve visited both campuses for homecoming. Their cars and house are dotted with hats, shirts, glasses and other things bearing their schools’ logos.

Jim begrudgingly wears a Western Kentucky bicycle shirt that Candy got him for Christmas, and it’s even in his Facebook photo.

“We’ve been married 27 years, so he knows what he needs to do to make his wife happy,” Candy said.

Jim has also converted their 25-year-old son into a KU fan, even though he graduated from Belmont University in Nashville, Tenn., another school in this year’s NCAA Tournament. When Jim and his son watch KU games together, they yell at the opponents and the refs, but Candy may be the real victim.

“It sometimes gets to the point where you have to wear earplugs,” Candy said.

Though KU often plays on national TV, it’s rare that Candy gets to catch a WKU game from Chicago. So Friday night, she and Jim will head to a bar to watch the game with a few of her college friends from the area.

Jim will be wearing KU blue, but he says things shouldn’t get too heated.

“The best news is that we won’t be around anyone from Missouri,” Jim said.

Jim hoped to book a flight to Kansas City for the Egans to see the game live, but airfares from Chicago were out of hand.

Jim raised the idea of a road trip, but Candy said she didn’t want to spend 10 hours in a car. Jim suspects she actually didn’t want to be stuck at the Sprint Center in a sea of KU fans.

Candy and Jim both say they expect Western Kentucky to make things interesting in the first half Friday night, but KU should pull away in the second half.

Jim said he doesn’t even want to think about what might happen if KU becomes the first No. 1 seed ever to fall to a No. 16 seed in the tournament. He suspects his wife won’t be too hard on him.

But Candy said she might not be able to stop herself. It may be rare for a WKU grad to be married to a KU grad, but it’s even rarer for that WKU grad to have a chance to talk some trash.

“I think I would stand on the bar and do a dance,” Candy said. “It would be unbelievable. But I’m sure poor Jim would have a miserable week next week, because I would be in his face.”

So you mean that read dude is one of these things?

Don't preach to me fatso!

Are those eyes, b00bs or arse cheeks?

We need a nice, clean towel here at summer camp. We don't need a towel that shoots heroin and has sex for money.

Some people are so picky about their towels.

“The best news is that we won’t be around anyone from Missouri,” Jim said.

And neither will anyone else affiliated with the NCAA tournament starting tomorrow. Well put, Jim.

At least he'll get to rub something in for life. I'm sure she's got a list.

I don't think anyone will have to put up with Mizzou's crap this year.